In a report containing ammunition for both supporters and opponents of the Democratic election-year proposal, the Congressional Budget Office said gradually raising the minimum from $7.25 hourly to $10.10 would lift 900,000 people above the federal poverty level by 2016. 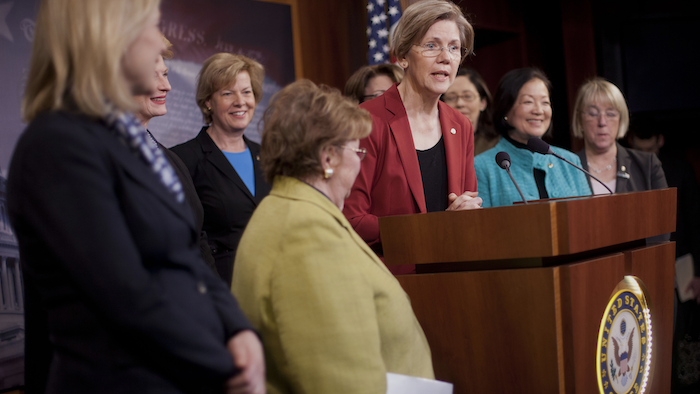 In a report containing ammunition for both supporters and opponents of the Democratic election-year proposal, the Congressional Budget Office said gradually raising the minimum from $7.25 hourly to $10.10 would lift 900,000 people above the federal poverty level by 2016. That is out of 45 million who would otherwise live in poverty without an increase.

But the analysis also noted a down side: About 0.3 percent fewer jobs, higher costs for business owners and higher prices for consumers.

The study was unveiled as the Senate prepares for a March debate on the Democratic plan ramping up the minimum in three steps to $10.10 by 2016. The proposal is backed by Obama and is a keystone of Democrats' campaign-season plans to highlight their effort to make incomes more equitable, but it faces strong Republican opposition and long odds of approval by Congress.

The analysis immediately added fuel to the partisan dispute over the proposal. It put authoritative weight behind long-time GOP claims that increasing the minimum wage would cost jobs by forcing companies to spend more on wages.

"This report confirms what we've long known: While helping some, mandating higher wages has real costs, including fewer people working," said Brendan Buck, spokesman for House Speaker John Boehner, R-Ohio. "With unemployment Americans' top concern, our focus should be creating — not destroying — jobs for those who need them most."

Democrats have said such claims are overblown and outweighed by the benefits to workers and the overall economy as low-paid employees spend more money. Sen. Tom Harkin, D-Iowa, author of the Senate legislation, cited other research concluding that a higher minimum wage would create jobs, not reduce them.

"And as the CBO report affirms, an increase in the minimum wage will help lift families out of poverty," Harkin said.

The study also examined the impact of boosting the minimum wage to just $9 hourly by 2016. That lesser increase would have smaller effects: About 100,000 fewer jobs, higher wages for 7.6 million workers and 300,000 people lifted out of poverty.

The report said the increase to $10.10 would add $31 billion to the earnings of low-wage workers. But it noted that only 19 percent of that increase would go to families earning less than the poverty threshold, while 29 percent would go to families earning more than triple the poverty level. That is because many low-wage earners are not in low-wage families.

"No matter how the critics spin this report, the CBO made it absolutely clear: Raising the minimum wage would lift almost one million Americans out of poverty, increase the pay of low-income workers by $31 billion, and help build an economy that works for everyone," said House Minority Leader Nancy Pelosi, D-Calif.

The CBO study examined a proposal similar to Harkin's and focused on the plan's impact in late 2016, when it would take full effect. After 2016, Harkin's bill would require the minimum wage to be increased annually to reflect rising inflation.

The analysts said their estimate of employment losses was approximate. They said the actual impact could range from a very slight employment reduction to a loss of 1 million workers.

The report said that besides boosting wages for people earning less than $10.10 hourly, some people making more than that amount would also see higher earnings as bosses adjust their pay scales upward.

Some people's incomes would grow as their earnings increase, causing them to pay more taxes. But for others, income would fall — reducing their tax burden — and still others would begin collecting unemployment insurance.