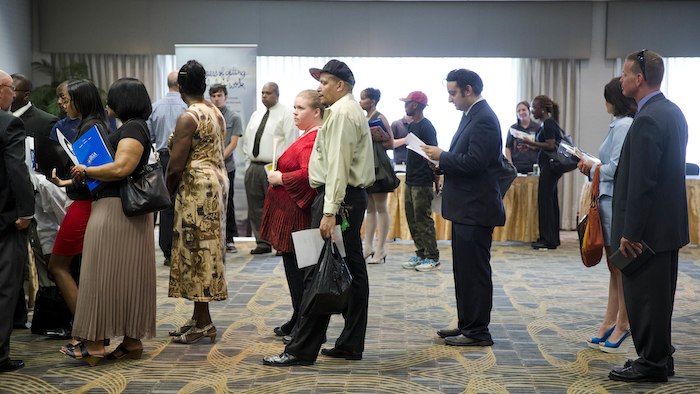 The Labor Department said Thursday that weekly claims for jobless aid fell 14,000 last week to a seasonally adjusted 298,000. The prior week's figures were revised up slightly to 311,000.

Applications are a proxy for layoffs.

Employers aren't just keeping workers. They're hiring at a pace last seen during the tech boom. They added 209,000 jobs in July, the sixth straight month that job gains exceeded 200,000. The economy has generated 244,000 new jobs a month since February.

The recent hiring has encouraged more people to look for work, causing July's unemployment rate to rise to 6.2 percent from 6.1 percent in June. The government counts only people searching for jobs as unemployed.

Hiring has yet to boost wages by much. Wage growth has slightly outpaced inflation since the recession ended more than five years ago.

But more jobs mean more people getting paychecks, which could drive consumer spending and economic growth.

The economy has shown other signs of improvement. The Commerce Department said Tuesday that U.S. home construction rose to an eight-month high in July, regaining momentum after two months of declines.

And some Federal Reserve think the economy is healing fast enough that Fed should act sooner than previously thought to reduce the extraordinary support it's been providing the economy through super-low interest rates.

Minutes of the Fed's discussion at its July 29-30 meeting released Wednesday showed that some officials thought the Fed would need "to call for a relatively prompt move" to reduce the stimulus it has supplied since the financial crisis erupted in 2008. Otherwise, these officials felt the Fed risked overshooting its targets for unemployment and inflation.

Apple Bounces Back To Hit A New High