The number of people applying for U.S. unemployment benefits dropped by a sharp 36,000 last week to a seasonally adjusted 280,000, a sign that the job market is strengthening. 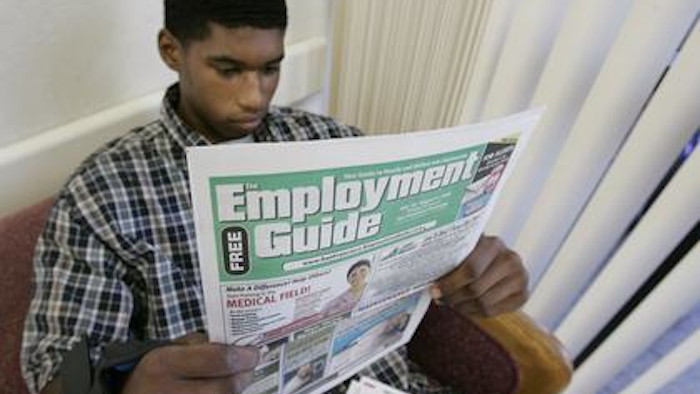 WASHINGTON (AP) — The number of people applying for U.S. unemployment benefits dropped by a sharp 36,000 last week to a seasonally adjusted 280,000, a sign that the job market is strengthening.

The four-week average of applications, a less volatile measure, fell 4,750 to 299,500, the Labor Department said Thursday. The total number of people collecting benefits during the first week of September was 2.43 million, the fewest since May 2007.

Applications for unemployment benefits remain at pre-recession levels. The number of people seeking benefits has been trending downward for the past four months.

Over the past year, the four-week average for applications has fallen 7.1 percent. In 2009, during the Great Recession, they topped 650,000.

Applications are a proxy for layoffs. When fewer people seek benefits, it suggests that employers are keeping their workers, likely because they are more confident about customer demand and may be ready to hire.

The drop in the number of people applying for benefits has been coupled by steady job growth, despite a slowdown in hiring in August.

Employers added just 142,000 jobs last month, according to the Labor Department, down from 212,000 in July. That followed a six-month streak of monthly job gains in excess of 200,000. The unemployment rate fell to 6.1 percent from 6.2 percent, but only because some of those out of work gave up looking. The government doesn't count people as unemployed unless they are actively searching for a job.

The sharp drop in applications for unemployment benefits "should ease any fears that the weaker-than-expected payrolls data for August represented a change in the trend," said Jim O'Sullivan, chief U.S. economist at High Frequency Economics.

Still, increased hiring has yet to lift most Americans' paychecks. Wage growth has barely outpaced inflation since the recession ended more than five years ago.