U.S. Trade Representative Michael Froman on Monday urged Japan to open its market to American cars and insurance companies, which would pave the way for a broader regional free trade agreement. 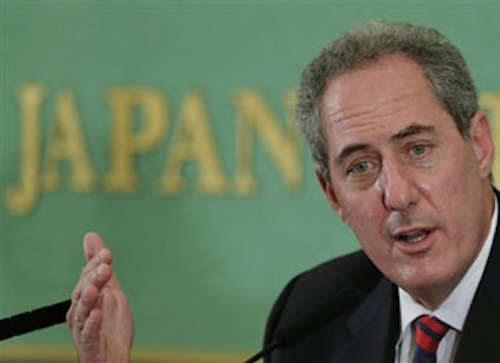 TOKYO (AP) -- U.S. Trade Representative Michael Froman on Monday urged Japan to open its market to American cars and insurance companies, which would pave the way for a broader regional free trade agreement.

Froman told reporters that the ongoing talks with Japan dealing with such historical sticking points are tied to the success of the larger and parallel Pacific free trade negotiations.

"There are longstanding issues," he said at the Japan National Press Club.

Japan joined the Trans-Pacific Partnership negotiations involving 12 countries on July 23, aimed at achieving regional free trade. The Japan-US talks are dealing with non-tariff barriers such as the auto and insurance industries.

Froman, in Asia for talks on the regional trade pact and meetings with his Southeast Asian counterparts, said the historical issues highlight a sense in some industries that "Japan's success came at the expense of others."

He said that imported vehicles make up a tiny fraction of the Japanese market, although nearly half the U.S. auto market is controlled by foreign manufacturers.

He said the feelings of unfairness reached their height in the late 1980s and early 1990s but still persist today.

The U.S. also believes that Japanese government-backed insurance services run by the post office have an advantage over private and foreign companies.

The Japanese government said in a statement that Foreign Minister Fumio Kishida and Froman agreed on the importance of the Pacific trade deal for economic growth and stability.

Japanese Prime Minister Shinzo Abe, who took office late last year, is a proponent of the Pacific trade pact, despite running the risk of domestic criticism, such as from farmers who fear cheap imports.

When asked about Japanese media reports that said Tokyo may be willing to do away with 85 percent of its tariffs, Froman called it "a good initial step."