Tesla Motors Inc.'s shares jumped Monday on a report that its Model S is gaining popularity in California. 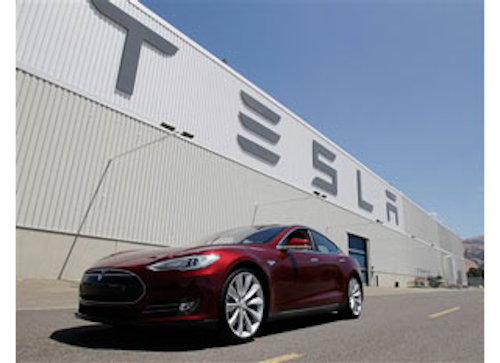 Tesla Motors Inc.'s shares jumped Monday on a report that its Model S is gaining popularity in California.

THE SPARK: The report, released by the California New Car Dealers Association, found that the Tesla Model S is among the top five selling models in the luxury and sports-car segment in the state through June of this year. It came in at number three with 4,714 registrations, behind the Mercedes E-Class and BMW 5-Series and beating out the Lexus GS and Audi A6.

There was a large spike in Tesla's popularity in June with 1,097 of the brand's California registrations coming in that month alone. That is compared to eight Tesla registrations in June of last year.

THE BIG PICTURE: While the company still has a small fraction of total market share, investors apparently see the report as a sign that there is significant demand for Tesla's electric cars.

Tesla currently makes one car, the $70,000 Model S, which won Consumer Reports' top rating in July. The company delivered 5,150 Model S sedans during the second quarter, surpassing its expectation for 4,500.

The company said recently that it plans to speed development of its next vehicle, the Model X crossover, as well as a right-hand drive version of the Model S in the second half of this year. The Model X is expected to go on sale next year.

Tesla is in a unique niche of selling high-end electric cars that are very design- and performance-focused. Investors are anticipating that the popularity of its product will rise as the cars become more readily available and are betting on the ingenuity of its billionaire Chairman and CEO Elon Musk.

SHARE ACTION: Tesla shares have been on a tear in recent months, rising more than five-fold since the start of this year and reaching all-time highs. Its stock added $10.03, a 6 percent gain, to hit $171.87 by midday Monday. Its market value is now about $20 billion.