Germany boasts the world's most powerful woman, Europe's most powerful economy and an industrial machine that's the envy of the planet. With all that muscle, it seems natural to assume the mantle of Europe's undisputed leader. But Germany is a reluctant giant. 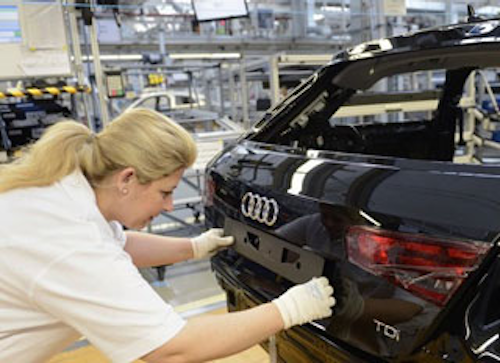 With all that muscle, it seems natural to assume the mantle of Europe's undisputed leader. But Germany is a reluctant giant — and this Sunday's national elections are unlikely to change that.

If the political debate ahead of the election proved anything, it's that neither incumbent Angela Merkel's conservative forces, nor her center-left rivals — nor indeed the German people at large — have any appetite to take center stage as a European or global leader, despite the unmistakably German flavor of the continent's response to its debt crisis.

Germany seems content to lurk in the shadows, perhaps quietly pulling strings or exerting pressure, but unwilling to assume the risks that true political leadership entails. That fact has been reflected on the campaign trail, with little discussion of Germany's role in Europe and the wider world, or the future of the common euro currency.

Such issues have taken a back seat to more mundane matters such as higher taxes for the rich or a national minimum wage. And both Merkel and challenger Peer Steinbrueck were quick to rule out German participation in any military strikes against Syria.

To be sure, since Greece's debt troubles ignited Europe's debt crisis nearly four years ago, Germany's economic firepower has made it the country without which few significant decisions can be made in Europe. Sixty-eight years since the collapse of Adolf Hitler's Nazi regime, Berlin is in a novel position of pre-eminence after decades of being on equal terms with France as the continental heavyweight.

But with Europe often seen as rudderless, some — even among former victims of German World War II aggression — would like Germany to embrace its leadership role openly.

Foreign Minister Radek Sikorski of Poland, a country traditionally wary of its bigger neighbor, has said that "nobody else can do it."

"I fear German power less than I am beginning to fear German inactivity," Sikorski told a largely German audience in late 2011.

Merkel is fond of saying that Europe must become more competitive as China and other powers rise. "The world doesn't sleep," she said recently. However, she hasn't coupled that with any grand visions for a continental revival.

In Europe, Merkel — an instinctively cautious politician — concentrates on what she calls her "step-by-step" approach of methodically tackling the continent's debt and competitiveness problems, keeping a tight hold on Germany's purse strings.

And if Germany's allies want it to exert more than economic "soft power," they are likely to be disappointed.

"Berlin quite simply lacks the political ambition to provide clear leadership in turbulent times," Ulrike Guerot of the European Council on Foreign Relations wrote in a research paper this month.

"Rather, it hopes to influence events by force of example, getting others to transpose the German model of thriftiness at home and competitiveness abroad into their own financial, economic and political cultures."

Concerns run high beyond Europe over Germany's timid attitude to global affairs, especially since it is one of NATO's biggest members.

"There's a lot of frustration in Washington with Germany's reluctance to take on a bigger role in international security affairs in particular," said Chris Chivvis, a political scientist at the RAND Corporation.

"There's a sense sometimes, rightly or wrongly, that Germany occasionally allows its history to become an excuse for not taking on responsibilities that are expected of a country with its wealth and, frankly, its global interests."

German politicians of all stripes balk at publicly embracing a dominant political role.

In July, Finance Minister Wolfgang Schaeuble said "the idea that Europe should be — or even can be — led by a single country is wide of the mark," not only because of Germany's history but because the complex 28-nation EU isn't suited to a "leader-follower dynamic."

"We do not want a German Europe," he said.

Joachim Fritz-Vannahme of Germany's Bertelsmann Foundation think tank notes that the German word for "leader" — "Fuehrer" — is itself problematic since it was used by Hitler. Postwar Germany long rejected any notion of "leadership," he added.

Germany has become more self-confident but still "relatively frequently refuses to exert leadership and doesn't want to hear the word 'hegemon,'" he said. "That is the great psychological inhibition that exists both in the electorate ... and among our leading politicians."

That lack of desire for the kind of high-profile role played by the United States — or by Britain and France generations ago — means the country hasn't translated its economic clout into international political power.

Germany backed the 1999 bombing of Serbia during the Kosovo crisis and agreed to send troops to Afghanistan. But the Germans refused to join in the 2003 U.S.-led invasion of Iraq and the 2012 Western bombing campaign that toppled Libyan leader Moammar Gadhafi.

If anything, Germany's reluctance to join in military interventions has increased over recent years.

Foreign Minister Guido Westerwelle advocates a "culture of military restraint," a view that is widely shared across the political spectrum.

On Syria, Merkel has taken a cautious line, pushing for diplomatic progress and leaving open whether it would be legitimate for others to take military action.

She also has argued that it makes sense to "help trustworthy partners" ensure security in their own regions, sometimes by delivering military equipment. Even that has drawn fire from domestic opponents, who argue that she's too ready to export weapons to sensitive areas such as the Persian Gulf region.

"With me as chancellor, no weapons would be exported to flashpoints or to countries that violate human rights," Steinbrueck said this summer.

Business Leaders: It Makes Sense To Put Jobs In U.S.