Concerned about the nation's childhood obesity issues, the first lady on Wednesday is convening the first White House summit on food marketing to children to get involved parties talking about how to help consumers make healthier food choices. 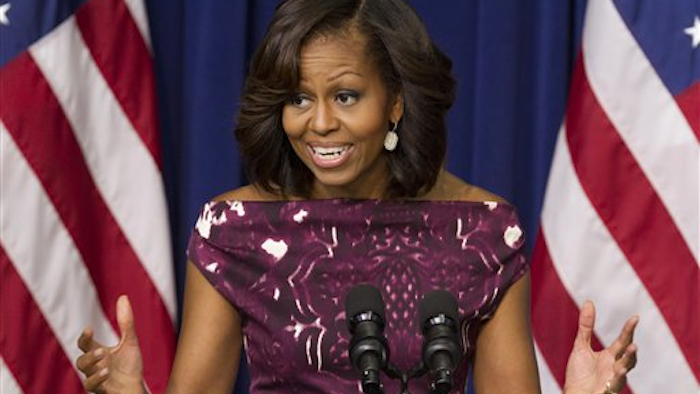 Concerned about the nation's childhood obesity issues, the first lady on Wednesday is convening the first White House summit on food marketing to children to get involved parties talking about how to help consumers make healthier food choices. That includes enlisting the persuasive power of the multimillion-dollar food marketing industry.

As she helped kick off a nationwide campaign last week to encourage people to drink more plain water, Mrs. Obama said she would keep reaching out to new people and organizations and keep making the case for healthier choices like water and fruits and vegetables.

The White House says it has invited representatives from the food and media industries, advocates, parents, representatives of government agencies and researchers, though it did not release a list of names and organizations. Mrs. Obama will open the meeting with public remarks. The rest of the meeting will be closed to the media.

Consumer advocates say studies show that food marketing is a leading cause of obesity because it influences what children want to eat.

A 2006 report on the issue by the influential Institute of Medicine concluded that food and beverage marketing to children "represents, at best, a missed opportunity, and, at worst, a direct threat to the health of the next generation."

Improvements have come in the years since, especially after Mrs. Obama began drawing attention to childhood obesity with a campaign of her own in 2010.

She stood with the Walt Disney Co. last year when it became the first major media company to ban ads for junk food from its media channels, websites and theme parks. She also has praised the Birds Eye frozen food company for encouraging children to eat vegetables, including through promotions featuring characters from the Nickelodeon comedy "iCarly."

But the first lady and consumer advocates say more improvements are needed.

"Most of the food ads that kids see are still for unhealthy food, which makes it really hard for parents to feed their children healthfully," said Margo Wootan, a nutrition lobbyist for the consumer advocacy group Center for Science in the Public Interest. Wootan planned to attend the summit.

In a speech earlier this year to a health conference, Mrs. Obama said limiting the promotion of unhealthy food to kids isn't the only solution.

"It's also about companies realizing that marketing healthy foods can be responsible and the profitable thing to do as well," she said.

Preliminary guidelines released in 2011 asked food companies, advertisers and TV networks only to market foods to children if they are low in fats, sugars and sodium and included specified healthy ingredients. But the effort fizzled after many Republican lawmakers sided with the food industry, which accused government of overreaching.

The companies said the guidelines were overly broad and would limit marketing of almost all of the nation's favorite foods. The food companies also said they were feared government retaliation if they didn't go along with guidelines that were intended to be voluntary.

Large food companies then announced their own guidelines that, not surprisingly, were more lenient than what the Federal Trade Commission, the Agriculture Department, the Food and Drug Administration and the Centers for Disease Control and Prevention had proposed under the direction of Congress.

The FTC publicly backed off some of the guidelines, including a recommendation that companies change packaging and remove brand characters from some foods. In late 2011, the agency said Congress "had clearly changed its mind" and said it would take another look. It never released updated guidelines.

"Food marketing is the elephant in the room," she said. "If you're serious about childhood obesity, you've got to do something about food marketing."