Chrysler Group is reluctantly preparing for an initial public offering of some of its shares. The automaker is proceeding with the IPO after it failed to reach an agreement on the value of the stock with the retiree trust that owns it. 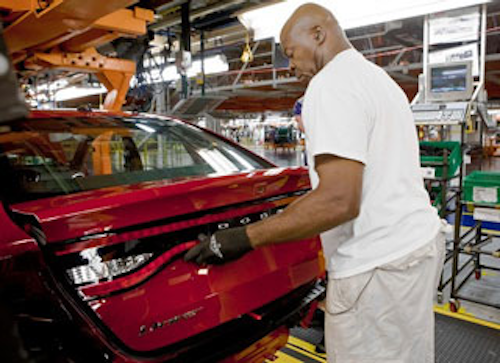 DETROIT (AP) -- Chrysler Group is reluctantly preparing for an initial public offering of some of its shares.

The automaker is proceeding with the IPO after it failed to reach an agreement on the value of the stock with the retiree trust that owns it.

The shares that would be sold are owned by a United Auto Workers-run trust that pays the health care costs for around 130,000 blue-collar Chrysler retirees. The trust owns a 41.5 percent stake in Chrysler. It will get all of the proceeds from the IPO if it goes forward.

Sergio Marchionne, the CEO of both Fiat and Chrysler, has made it clear that he wants to buy up the UAW's share and combine Fiat and Chrysler. But the two sides have been unable to agree on a price. The trust has set the value of the stake at $4.27 billion, while Fiat says it's worth $1.75 billion.

At the trust's request, Chrysler filed the IPO paperwork with the U.S. Securities and Exchange Commission late Monday. But Chrysler emphasized that the shares may never be publicly sold. The two sides could still reach an agreement on the price of the shares without an IPO.

"There can be no assurance that any such offering will be made or as to the timing of any offering that is made," the company said in a statement emailed to The Associated Press.

Richard Hilgert, a Morningstar analyst who watches Fiat and Chrysler, said it's unlikely that the IPO will ever take place because it's not in the best interest of either the trust or Fiat.

"This is just the negotiating dance that they have to go through to come to an agreement," he said.

Hilgert thinks Fiat will likely exercise options that it has to buy another 16.6 percent of Chrysler stock, giving it 75.1 of the company's shares. That leaves 24.9 percent that would be sold to investors who might have different interests from Fiat.

Last year, Fiat sued the trust in Delaware Chancery Court, saying a 3.3 percent stake it wanted to buy was worth $139.7 million. The trust contended the shares were worth $200 million more than that. In July, a judge refused to set a price and said the issue would have to go to trial, a process that could take several more years.

The trust did not immediately respond to an email seeking comment. But it likely calculated that its shares are growing in value as Chrysler's sales and profits improve with the economy.

Chrysler reported its eighth straight quarterly profit in the April-June period, with net income up 16 percent to $507 million. Worldwide sales were up 10 percent to 643,000 vehicles. Among Chrysler's best sellers is the Ram truck, which has seen sales surge in the U.S. this year as contractors and other small businesses have begun buying trucks again.

In its filing, the company also warned that the IPO could hurt Fiat's alliance with Chrysler. Fiat owns 58.5 percent of Chrysler.

"Fiat has informed us that it is evaluating the various potential impacts that a public offering and the consequential introduction of public stockholders may have on its views of the Fiat-Chrysler alliance, and as such, is considering whether or not to continue expanding the Fiat-Chrysler alliance beyond its existing contractual commitments," Chrysler said in its filing.

Jack Nerad, a market analyst with Kelley Blue Book, said the trust's efforts to protect retirees might actually jeopardize current Chrysler employees, who might be better served by an alliance with Fiat. Chrysler has been able to cut vehicle development costs and expand its sales outside North America with Fiat's help.

The UAW and Detroit's automakers — Chrysler, Ford Motor Co. and General Motors Co. — formed the trust in 2007 in order to take growing health care costs off the companies' books. It currently has $52.4 billion in assets and pays the health care bills of more than 800,000 retirees and dependents.

Chrysler exited the U.S. public market 15 years ago, when Daimler acquired it. But the combination was a disaster, and Daimler sold most of Chrysler to private equity firm Cerberus Capital Management in 2007.

Cerberus hoped to stanch Chrysler's losses and rebuild the company, but was stopped short by the recession, which caused U.S. car sales to plummet. Despite billions in loans from the U.S. government, Chrysler filed for bankruptcy protection in April 2009.

In a deal brokered by the U.S. government, Fiat took over Chrysler's operations when it emerged from bankruptcy less than three months later. Fiat was given a 20 percent stake in Chrysler but has gradually acquired more of the company.

Fiat shares Chrysler's profits but can't use the Detroit automaker's cash — which now amounts to $11.9 billion — for its own operations. Fiat wants access to that cash to help it cope with the severe sales downturn in Europe.

Marchionne has said Fiat has $13 billion in cash, some of which could be used to buy out the trust fund's stake in Chrysler.