Barra To Stay The Course At GM, But Accelerate

General Motors Co.'s new CEO, Mary Barra, says she will largely keep in place the plans of her predecessor, from a restructuring in Europe to a focus on improving profit margins. But she hopes to accelerate that progress. 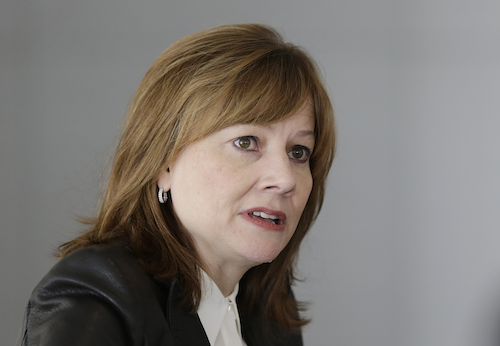 DETROIT (AP) -- General Motors Co.'s new CEO, Mary Barra, says she will largely keep in place the plans of her predecessor, from a restructuring in Europe to a focus on improving profit margins. But she hopes to accelerate that progress.

Barra held a 50-minute session a small group of reporters Thursday, her first interview becoming CEO on Jan. 15. Barra, 52, joked that the quiet conference room at GM's Detroit headquarters was a better place to talk than last week's Detroit auto show, where she was mobbed by hundreds of reporters.

Barra promised "no right or left turns" from the path laid out by former CEO Dan Akerson, who stepped down to care for his ailing wife. Under Akerson, GM rebounded from a 2009 trip to bankruptcy court. It became a publicly traded company again and reported a profit for 15 straight quarters, racking up almost $20 billion in net income thanks to stronger sales in the U.S. and China. GM restored its quarterly dividend on Akerson's last day.

"We're no longer just looking for viability, but we're looking for growth and leadership in the operations we have around the world," Barra said. "Now that some of those things have gotten the attention and are righted, let's take it and go."

Barra is going ahead with a European restructuring plan that will cost the automaker $1.1 billion this year. GM still expects to achieve 10-percent pretax profit margins in North America and break even in Europe by the middle of this decade, she said. It also wants to increase annual sales in China to 5 million by next year, up from 3.1 million last year.

Barra was Akerson's global product development chief and part of a team that helped him develop this strategy, so she's comfortable sticking with his goals.

"That's why we can keep the momentum going and look to accelerate it because there's no, 'Hey, we've got to pause and look at this,'" she said.

Barra says GM — which was the world's second-largest automaker by sales last year after Toyota, with 9.7 million vehicles sold — is making strong products, but customers don't always know that. In Europe, for example, she's heard drivers express surprise at the quality of Opel cars when they finally drive them.

Among her priorities is making GM's brand messages clear and consistent worldwide. New vehicles like the Cadillac ATS sedan — which goes on sale in China this year — can help Cadillac become a global luxury brand. Chevrolet needs to show that it provides a lot of value to buyers. The new Chevrolet Corvette — a relative bargain with a starting price of $52,000 — is proof of that, she said.

Barra will ask employees to focus on innovative ideas that will add value to vehicles and delight customers, whether it's a new program to help dealers or an unexpected feature like the rain-sensing rear wiper on the Chevrolet Spark subcompact.

Barra, a 33-year veteran of the company, said she has always had a collaborative leadership style from her earliest days as an engineer at GM's plants. She said she works well with Dan Ammann, GM's new president, and Mark Reuss, GM's new head of global product development.

"I've always been focused on winning the hearts and minds of the employee base," she said.

Barra, the first female CEO of a major automaker, said she is happy if her appointment helps motivate others. But she doesn't give much thought to her gender.

"I never approached any job as, 'Oh, I'm a woman doing this job,'" she said. "I want to be valued for leading the team and the results we achieve."