The prices U.S. companies receive for their goods and services rose by the most in seven months in April, led by more expensive food and higher retail and wholesale profit margins. 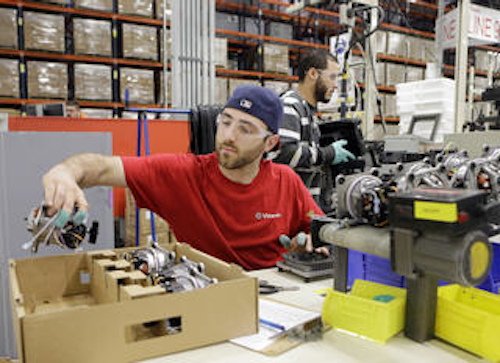 WASHINGTON (AP) — The prices U.S. companies receive for their goods and services rose by the most in seven months in April, led by more expensive food and higher retail and wholesale profit margins.

The Labor Department said Wednesday that the producer price index rose a seasonally adjusted 0.6 percent from March to April after a 0.5 percent increase from February to March. The gains suggest that inflation is picking up from very low levels.

In the past 12 months, producer prices have increased 2.1 percent, the biggest 12-month gain in more than two years. That figure is roughly in line with the Federal Reserve's 2 percent inflation target. The producer price index measures price changes before they reach the consumer.

Excluding the volatile categories of food, energy and retailer and wholesaler margins, however, the month-to-month increase in April was smaller: Core prices rose 0.3 percent from March.

Ian Shepherdson, chief economist at Pantheon Macroeconomics, noted that the profit margins dropped sharply over the winter, before increasing in the past two months, "so we can't yet say an upward trend is emerging."

A key question is whether the sharp increases in producer prices of the past two months will flow into consumer prices. Wage increases have been weak, and unemployment remains high at 6.3 percent. The squeeze for consumers means that manufacturers and retailers haven't been able to raise prices much. April's consumer price index will be released Thursday.

"It will be tough to push higher costs onto consumers," Jennifer Lee, senior economist at BMO Capital Markets, said in a research note.

The two months of big increases have lifted wholesale inflation from historically low levels. The producer price index rose just 1.2 percent in 2013 after a 1.4 percent increase in 2012.

Food costs jumped 2.7 percent in April, the highest in more than three years, driven by an 8.4 percent increase in meat prices.

Profit margins received by retailers and wholesalers rose 1.4 percent in April, the same as in the previous month. Margins are rebounding after sharp drops over the winter months. Profits had been held down by discounting after the winter holidays and by harsh weather in January and February that kept shoppers at home.

Low inflation has enabled the Fed to pursue extraordinary stimulus programs to try to boost spending, hiring and economic growth. It has begun to unwind some of its stimulus, cutting its monthly bond purchases to $45 billion from $85 billion last year. The bond purchases are intended to lower long-term interest rates.

But the Fed has kept the short-term interest rate it controls at nearly zero since December 2008. Higher inflation could raise pressure on the Fed to increase that rate earlier than it had planned.