Chinese police Wednesday accused a British executive of GlaxoSmithKline of leading a sprawling scheme to bribe doctors and hospitals to use its drugs. 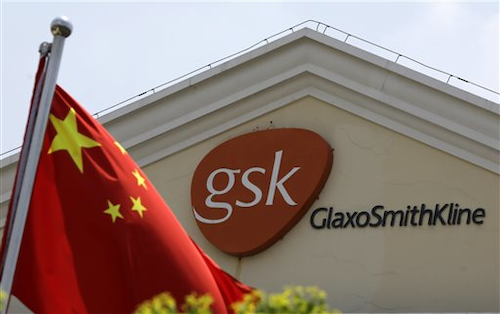 BEIJING (AP) -- Chinese police Wednesday accused a British executive of GlaxoSmithKline of leading a sprawling scheme to bribe doctors and hospitals to use its drugs.

The announcement was the first time a foreign employee in China of British-based GSK was accused in the investigation announced last July. It highlighted the widespread use of payments to doctors and hospitals by sellers of drugs and medical equipment in a poorly funded health system that Chinese leaders have promised to improve.

The executive, Mark Reilly, is accused of operating a "massive bribery network," said a police official, Gao Feng, at a news conference. He said the case had been handed over to prosecutors for formal indictment.

Beginning in January 2009, Reilly is accused of ordering his sales team to pay doctors, hospital officials and health institutions to use GSK's products, said Gao, deputy director of the Ministry of Public Security's economic crimes unit. He said that resulted in "illegal revenue" of billions of yuan (hundreds of millions of dollars).

The British Embassy in Beijing said diplomats were in regular contact with Reilly and were providing "consular assistance." The embassy declined to comment further while the case was under way.

Reilly was GSK's senior vice president of pharmaceuticals for China and Hong Kong and former general manager for China.

"We take the allegations that have been raised very seriously. They are deeply concerning to us and contrary to the values of GSK," the company said in a statement. "We want to reach a resolution that will enable the company to continue to make an important contribution to the health and welfare of China and its citizens."

A second foreign drugmaker, AstraZeneca, said in July that police in Shanghai were investigating one of its salespeople. The company has given no information since then.

Doctors and hospitals routinely accept informal payments from patients and suppliers of medical goods to top up low salaries and cover gaps in budgets.

The company charged prices up to seven times the level charged in other countries, Gao said. He said that before a patent on one of its drugs was due to expire in 2012, GSK paid bribes to discourage hospitals from switching to cheaper generic versions.

"The more it bribed, the more drugs it could sell," he said.

In a separate statement, police in the central city of Changsha, where the investigation began, said Reilly and two Chinese executives also are accused of bribing government officials in Beijing and Shanghai.

On Wednesday, Chinese employees of GSK were shown on state television accusing Reilly of organizing bribery.

"Mark Reilly wanted to maximize the company's profits," said one of the employees, Cheng Hongbo. "A lot of money was invested in influencing doctors that have power to prescribe for patients."

Another employee, Zhang Guowei, said the drug maker "mobilized our connections and bribed officials" to influence the latest investigation. He said Reilly told subordinates to "go ahead" when he was told bribes were needed.

Police in Changsha said last July that employees appeared to be trying to evade GSK's internal anti-bribery controls by making payments totaling as much as 3 billion yuan ($490 million) to a travel agency that gave back at least part of that money.

GSK gave its "full assistance and cooperation" to the investigation, Gao said.