A mysterious radiation release that has indefinitely shuttered the federal government's only permanent nuclear waste dump may have been caused by a switch in the type of kitty litter that is mixed with the toxic waste. 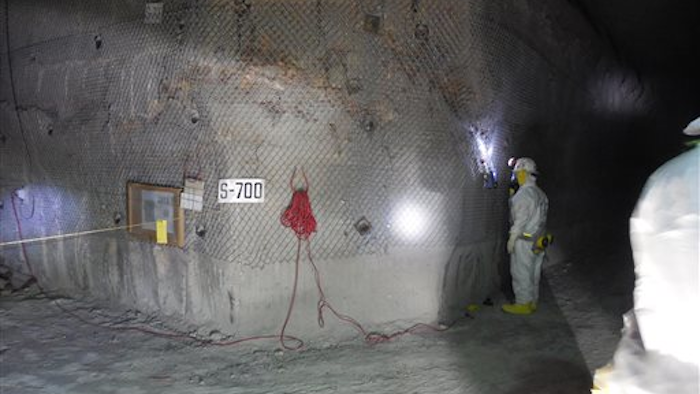 CARLSBAD, N.M. (AP) -- A mysterious radiation release that has indefinitely shuttered the federal government's only permanent nuclear waste dump may have been caused by a change in the type of kitty litter that is mixed with the toxic waste.

That's one of the theories that officials are exploring as they investigate the Feb. 14 leak at the Waste Isolation Pilot Project in southeastern New Mexico that contaminated 21 workers with low levels of radiation, the Carlsbad Current-Argus reported Tuesday (http://bit.ly/1iIHsdz ).

Jim Conca, a scientist who worked at the facility from 2000 to 2010, told the newspaper he believes a change from non-organic to organic litter caused a chemical reaction inside a waste drum, releasing the radioactive isotopes.

New Mexico Environment Department Secretary Ryan Flynn confirmed to the paper on Monday that he has heard Department of Energy officials discuss the possibility that kitty litter may have been to blame for the radiation leak. Flynn said it is just one of many theories the DOE is exploring and nothing is certain at this time.

Officials with the federal agency and the contractor that runs the facility, Nuclear Waste Partnership, did not immediately respond to questions about the report.

The dump 26 miles east of Carlsbad cannot take in liquid waste, so kitty litter is used to absorb any liquid before drums of waste are sealed and shipped to the facility, Conca said. The dump is the federal government's only permanent repository for waste from decades of building nuclear bombs from Los Alamos National Laboratories and other federal facilities.

WIPP Recovery Manager Jim Blankenhorn told a town hall meeting last week that after several trips into the half-mile-deep repository, officials believe the radiation leak was likely caused by a chemical reaction in nuclear waste that was mixed with nitrate salt. Blankenhorn said a switch from a non-organic substance to organic was what triggered the event. The unidentified substance containing elements mirroring nitrate salt is kitty litter, Conca said.

"I'm just dying to know why this happened and who approved it, because it was a dumb idea," Conca said. "You just can't make a change to the procedure without reviewing it."

Investigators on Monday said crews on the latest trip into the mine spotted melted plastic and rubber on some drums and boxes of waste, indicating there was some kind of heat generated in the room where the waste is stored.

Nine days before the release, a truck hauling salt in the mine caught fire. But officials have said the fire was far from the waste-handling area and that the events were likely unrelated.

Initial investigations into both accidents have blamed them on a slow erosion of the safety culture at the 15-year-old, multi-billion-dollar site.