A pair of Texas lawmakers toured the Huy Fong Foods plant Monday in the small Los Angeles suburb of Irwindale, where officials are moving to declare David Tran's operation a nuisance. 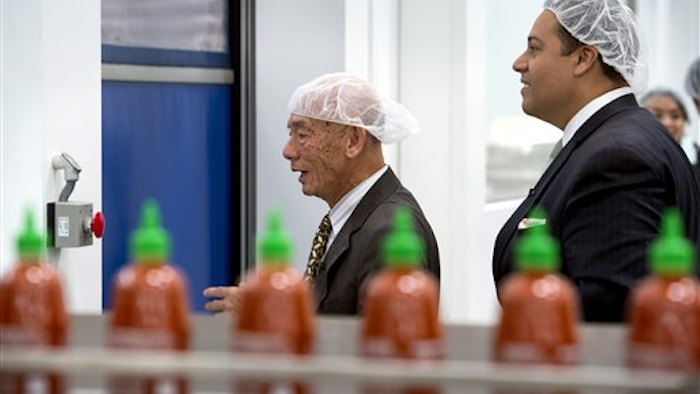 IRWINDALE, Calif. (AP) -- The maker of the popular hot sauce Sriracha said Monday that he has no plans to move his contested plant out of California but would consider expanding into Texas if the Lone Star State can produce peppers as hot as the ones grown especially for him in Southern California.

A pair of Texas lawmakers toured the Huy Fong Foods plant Monday in the small Los Angeles suburb of Irwindale, where officials are moving to declare David Tran's operation a nuisance after dozens of residents complained about flaming hot odors burning their throats and eyes.

State Sen. Carlos Uresti and state Rep. Jason Villalba held a news conference after the visit to extol the virtues of doing business in their state.

"We're not here to offer any specific incentives, but just to let it be known there are incentives," Uresti said. He and Villalba noted Texas has no personal income tax, among other benefits.

Tran said Texas must prove it can grow chili peppers as hot as the hybrid jalapenos he gets from a farm that specifically developed them to make his Sriracha sauce the hottest possible.

"If there is not chili peppers, we cannot build the plant," he told reporters.

Although Tran had the Texas flag flying outside the facility on Monday, he said it was just meant to welcome his visitors. Inside the plant's employee parking lot, and out of public view, a large sign declared, "No Tear Gas Made Here."

Huy Fong, located in the small, mainly industrial city of Irwindale, has come under fire from local lawmakers who say about three dozen of the city's 1,500 residents have signed sworn complaints that the odors from the plant's chili-grinding operation make them sneeze and cough, their eyes burn and in some instances, caused them to see doctors.

The City Council is scheduled Wednesday to give final approval to an ordinance declaring the plant a public nuisance, although city staff members have asked that the vote be delayed. If the ordinance is approved, city officials say they could enter the plant and make changes to mitigate the smell.

"I don't think they can do that," a defiant Tran said in an interview. He added that he doesn't plan to attend Wednesday's council meeting or cooperate with the city any further.

He took a softer tone toward the people of Irwindale, saying those he meets tell him they want him to stay, and he showed a picture of a couple who recently toured the plant with their baby. He said the smell didn't bother them.

Tran said the 650,000-square-foot plant, which opened three years ago, is nearing capacity, and he will need a second facility soon. The privately held company says it did $80 million in sales last year, its best ever.

Tran said he would be open to putting a second plant in California or another state, but key is finding a place with the weather and soil conditions to support the hybrid peppers. Uresti and Villalba said their state's agriculture officials will begin investigating conditions in Texas.

"I need to stay in the USA," said Tran, a proud immigrant who arrived from Vietnam after serving as an officer in the South Vietnamese military during the war. "It doesn't matter which town or which state."