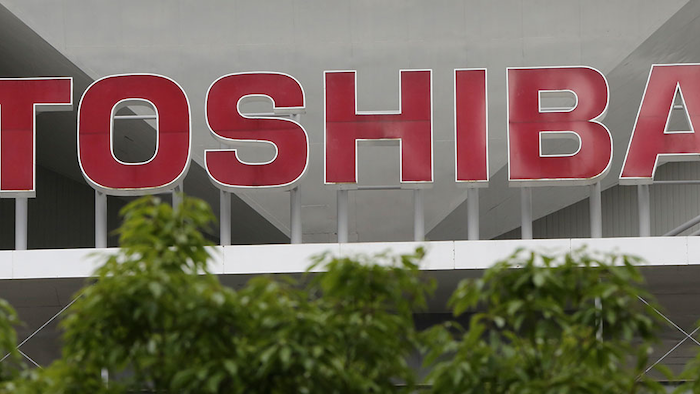 The 140-year-old Japanese energy and electronics colossus will be bereft of its most profitable and promising businesses and still entangled with the nuclear units that brought about its downfall.

Dogged by misfortune and mismanagement, Toshiba, whose roots date to the age of telegraphs and arc lamps in the 1880s, has warned of "substantial doubt about the company's ability to continue as a going concern."

In hindsight, the Tokyo-based company's first big misstep was its 2006 purchase of the U.S. nuclear unit of Westinghouse, which filed for bankruptcy protection last month.

But a massive accounting scandal and accounts from former Toshiba employees suggest more pervasive problems within its management.

Threatened with delisting of its shares, Toshiba reported a 950 billion yen ($8.4 billion) net loss for the fiscal year ended March, although the results were released without its auditors' approval.

FROM TRIUMPH TO CATASTROPHE

Toshiba's ascent paralleled Japan's rise as an industrial power. One of its founders, Ichisuke Fujioka, the son of a samurai, brought the incandescent light bulb to Japan and forged an alliance with General Electric.

Toshiba developed Japan's first radar and microwaves, electric rice cookers and laptop computers. It also invented flash memory, the ubiquitous computer chips that store and retain data for digital cameras, smartphones and all sorts of other gadgets and now are its most profitable business.

The company got into the nuclear business in the 1970s, decades before its $5.4 billion purchase of Westinghouse from British Nuclear Fuels Ltd.

At the time, the U.S. government was encouraging construction of reactors and China was embarking on a massive expansion of atomic energy, but analysts said Toshiba was paying too much.

"I'd like to make this the first success story," then-Chief Executive Atsutoshi Nishida declared, alluding to the dismal track record of other high-profile Japanese acquisitions, such as Mitsubishi Estate's purchase of Rockefeller Center and Sony's of Columbia Pictures.

Catastrophe struck in March 2011, when three reactors at the Fukushima Dai-ichi nuclear plant sank into meltdowns after a tsunami devastated much of Japan's northeastern coast.

Two of the six reactors there were built by Toshiba.

That marked a turning point for the industry as some nations stopped building new nuclear plants. Six years on, most reactors in Japan are idled, awaiting stricter safety checks.

Even before 2011, Muneo Morokuzu, a retired specialist on nuclear fuel cycles, and several other former Toshiba employees interviewed by The Associated Press said they had noticed an erosion of accountability at Toshiba.

Morokuzu joined the company in 1970 and took pride in what he calls "a spirit of humanity" among Toshiba workers. But he disapproved of misuse of company money. He was appalled by Toshiba higher-ups who used black company limousines for what he saw as personal outings, and he respected those who took cabs and paid out of their own pockets.

"It's a problem when the border between your own purse and the company purse becomes blurred," Morokuzu said. "I feel so sad. The brand has been tarnished. I hope Toshiba can pull together."

In 2015, Toshiba acknowledged that it had been systematically falsifying its books since 2008, as managers tried to meet overly ambitious targets. An investigation by an outside panel found profits had been inflated and massive expenses hidden across the board.

Koichi Okamoto, a professor of sociology at Toyo Eiwa University and governance expert who has researched Toshiba's problems, faults the company's senior leaders.

"If leaders at the top start violating compliance, then no one can stop them. So bosses shouldn't talk too much about making profits because that is already understood," he said.

"Big or small, companies like that will eventually go down."

The nuclear disaster deepened troubles brewing elsewhere at Toshiba under hard-driving Nishida, who rose to the top after leading its successful T1100 notebook computer project.

While Nishida was CEO, the company began focusing on two pillars of its sprawling business — nuclear power and computer chips. The aim: to temper the ups and downs of the volatile semiconductor sector with relatively stable growth in the nuclear business.

But, Toshiba was losing ground elsewhere as its once-stellar consumer electronics business took a beating from low-cost Chinese manufacturers and high-end Korean brands. Dell, Apple, Acer of Taiwan and China's Lenovo, among others, were meanwhile gobbling its market share in the personal computer business.

Last year, Toshiba sold its household appliance business to Midea Group of China, which is using the Toshiba brand name. It also has sold its medical equipment business to Japanese camera maker Canon.

Many viewed Toshiba's Westinghouse deal as a risky bet from the start.

Masashi Goto, a former Toshiba engineer who specialized in nuclear containment vessels, said Nishida was overly confident, as his background was not in the industry.

Although the nuclear division required relatively few staff and was insulated by its long-term government contracts, at the price Toshiba paid it was a gamble, he said.

Despite mounting desperation over soaring costs at Westinghouse, even after the Fukushima disaster, Toshiba's top management clung to the idea of a nuclear "renaissance."

The stricter safety regulations after the Fukushima disaster and extra complexities of the new kinds of reactors it was building have added to Westinghouse's headaches.

The crisis deepened when Westinghouse bought nuclear contractor CB&I Stone & Webster in December 2015, seeking to assert control over projects that were floundering amid delays and soaring costs.

The projects are not even half done, and a whistleblower in the U.S. has raised questions about the deal.

Toshiba is No. 2 worldwide in manufacturing flash memory chips, its mainstay business with the most obvious promise. It spun off the business in April, preparing to sell it to repair its decimated finances.

Western Digital has sought arbitration over the planned sale, seeking the exclusive right to negotiate with Toshiba.

If Toshiba survives, what likely will be left are its infrastructure operations, such as railways, power systems and factory automation, and its nuclear power business, given its responsibility for running and decommissioning 17 reactors in Japan, including those at the Fukushima plant.

Current Toshiba President Satoshi Tsunakawa says the Westinghouse purchase was a mistake and has promised not to take on new nuclear projects.

The company says it is considering selling Westinghouse, but even if it does Toshiba must still shoulder some Westinghouse-related costs. How much remains unclear.

The company is suing Nishida and four other former Toshiba officials for 300 million yen ($3 million) in damages for losses resulting from bogus bookkeeping. Nishida and the others deny wrongdoing, according to court records.

Nishida declined to be interviewed when a reporter visited his home in suburban Yokohama, a modest, middle-class dwelling typical of "salarymen" in Japan.

Goto, who now opposes nuclear power, likens reactors to bedridden patients, who must be cared for and eventually properly buried, an onerous, decades or possibly centuries-long task for the industry.

"Even after Fukushima, Toshiba management did not have the wisdom to change course," he said.