Samsung lawyers denied on Thursday all charges brought against Lee Jae-yong, the billionaire heir to Samsung, and questioned the legitimacy of the indictment in a massive corruption scandal that has ensnared the country's president. 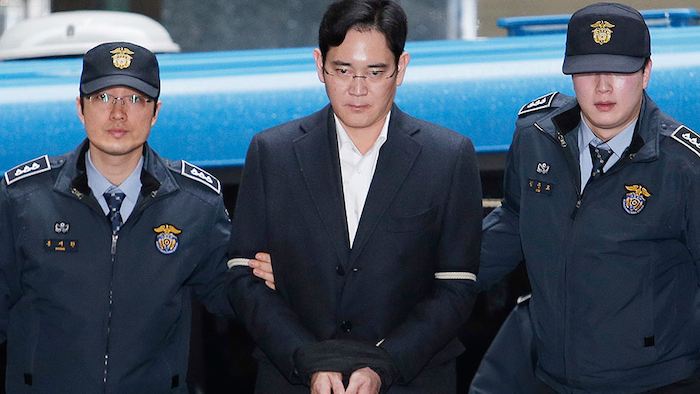 SEOUL, South Korea (AP) — Samsung lawyers denied on Thursday all charges brought against Lee Jae-yong, the billionaire heir to Samsung, and questioned the legitimacy of the indictment in a massive corruption scandal that has ensnared the country's president.

Lee's lawyers told a preliminary hearing that prosecutors are unfairly trying to create an impression Lee is guilty by mentioning a past conviction of his father and by depicting Lee as having absolute control over a strategy office that allegedly engaged in bribery. They asked prosecutors to rewrite their statement of allegations and to correct its depiction of the strategy office as a team working only for the benefit of the Samsung founding family.

The 48-year-old Samsung Electronics vice chairman was arrested and indicted last month on bribery, embezzlement and three other charges that could entail at least five years in prison if he's proven guilty. He is represented by an army of 13 attorneys at Bae, Kim & Lee LLC that includes former senior judges.

Both prosecutors and Samsung have high stakes in the case. The court must issue a ruling by the end of May.

Four other Samsung executives also were charged. Like Lee, they were not at Thursday's hearing and, through their lawyers, denied all allegations brought against them.

Prosecutors believe Lee and his aides used Samsung corporate funds to bribe President Park Geun-hye and one of her close friends in exchange for supporting a smooth leadership transition at Samsung. Samsung gave or promised to give 43.3 billion won ($38 million) to four entities controlled by Choi Soon-sil, Park's friend, who has been charged with misuse of power and meddling in state affairs.

Prosecutors allege the money was given to obtain government backing for a contentious merger of two Samsung companies in 2015 that served as a key step in passing corporate control to Lee from his ailing father.

Lee is the highest profile figure arrested during the probe into the influence-peddling scandal that has brought indictments of former presidential aides and dozens of others.

The Constitutional Court is due to announce a final ruling Friday on whether to remove or reinstate Park after the parliament voted in December to impeach her.

The hearing Thursday ended in one hour. It was interrupted twice by an elderly woman who yelled that she wanted to ask a question before she was escorted out by the court's security. Prosecutors and Samsung lawyers agreed to review by the end of next week a body of evidence that run 20,000 pages. The three judges on the panel did not set the next trial date.

The ruling at the Seoul Central District Court, which can be appealed twice, will determine whether Lee can return to the helm of South Korea's largest conglomerate, which was founded by his grandfather. It may also affect public opinion on the legitimacy of his inheriting leadership of Samsung from his father.

Some view the case as a test of whether South Korea can root out deep-seated collusion between government and business leaders. It's also seen as a test of whether the judicial system can end a tradition of leniency toward white collar crimes committed by chaebol, as family-controlled South Korean business groups that dominate the economy are known.