More people sought U.S. unemployment aid last week, but the average for the past month fell to the lowest level in 15 years, a sign that few employers are cutting jobs. 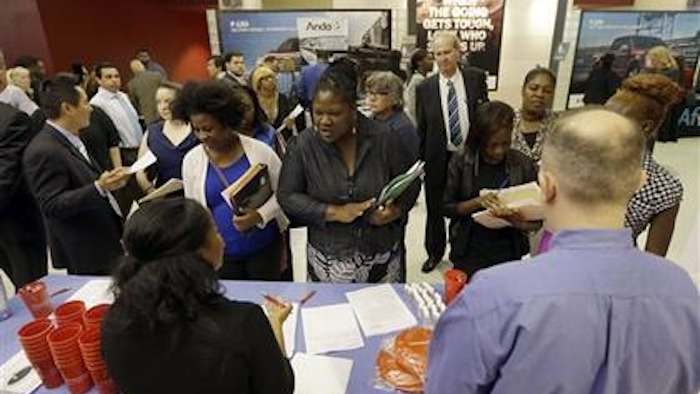 WASHINGTON (AP) — More people sought U.S. unemployment aid last week, but the average for the past month fell to the lowest level in 15 years, a sign that few employers are cutting jobs.

The figures indicate that six years after the Great Recession forced 8.5 million layoffs, Americans are enjoying solid job security. Economists note that when adjusted for population growth, the current level of applications is likely at all-time lows.

Applications are a proxy for layoffs. The low readings also suggest that employers are confident about the economy's health and see little need to shed workers.

The number of Americans receiving aid rose 15,000 to 2.27 million. That figure has fallen 10.7 percent in the past 12 months. Some of those former recipients have likely gotten jobs, but many others used up all the benefits available to them.

The decline in applications for unemployment aid echoes other data that point to a steadily improving job market.

The economy has generated 5.6 million jobs in the past two years, putting more paychecks into Americans' hands. But the steady job gains and falling unemployment rate have yet to boost wages.