Blue Bell Creameries believes the listeria found at its Oklahoma facility is likely linked to a non-sanitary room, though the company has not been able to pinpoint a single source for the contamination at its Texas plant, according to a report.

Juan A. Lozano, The Associated Press 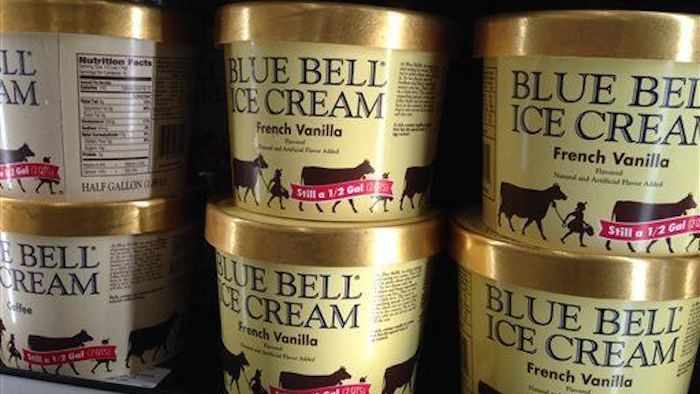 Blue Bell Creameries believes the listeria found at its Oklahoma facility is likely linked to a non-sanitary room, though the company has not been able to pinpoint a single source for the contamination at its Texas plant, according to a report released Wednesday.

The Texas-company submitted information about how it plans to correct the problems to the U.S. Food and Drug Administration, which inspected Blue Bell plants after the company's ice cream was linked to listeria illnesses in four states and three deaths in Kansas.

The documents, released by the FDA in response to an open records request by The Associated Press, also confirm that surface areas tested at an Alabama plant turned up the most serious form of listeria. No illnesses have been linked to products made at that facility.

Blue Bell stopped production at its plant in Brenham and at facilities in Broken Arrow, Oklahoma and Alabama after issuing a national recall in April. The contaminated products have been found at the company's Texas and Oklahoma plants.

In a 35-page response to FDA inspections done earlier this year, Blue Bell said ice cream products at its facility in Oklahoma might have been contaminated with listeria by equipment and sealed-ingredient buckets stored in a non-sanitary room. Blue Bell said its investigation found that "atomized particles" that could have carried listeria were released from a nearby drain in the room.

"If the equipment and the outside of these buckets were not cleaned successfully before being put back into the production area, they could have spread listeria into product through employee and equipment contact," the company wrote in its response.

Equipment is no longer being stored in this room, the company said.

At its plant in Brenham, Texas, Blue Bell said its initial efforts focused on breaking down equipment and lines but that "it eventually became evident that we would not be able to identify a single source for our entire Brenham facility, so we adopted a broad-focused remediation plan."

A private laboratory says it found evidence of listeria in a carton of ice cream manufactured at the Alabama plant. Blue Bell said it is reviewing the test results.

Blue Bell said it will implement — at all of its plants — improved testing procedures for equipment and surface areas, as well as for ice cream products. The company will also reconfigure lines and equipment, and add troughs and splash guards to ensure that condensation does not drip into ice cream products, a problem the FDA had highlighted in its inspections.

Blue Bell will also institute a company-wide clothing policy, with workers being provided coverings they must wear in production areas.

"We hope our efforts demonstrate the seriousness with which we are taking this situation, as well as our commitment to making sure we get this right," Blue Bell CEO and President Paul Kruse said in a statement.

"Once Blue Bell, the FDA and the applicable state regulators agree we are ready to reintroduce products into commerce, we plan to resume production with a phased-in selection of flavors and sizes, expanding only after our revised programs have demonstrated they are capable of ensuring product safety," Kruse said.

No date has been given for when Blue Bell products could be back in stores. The recall forced Blue Bell to lay off more than a third of its workforce.

Also Wednesday, the Centers for Disease Control and Prevention said its investigation into the outbreak was over. But it said people could still get sick because individuals could eat contaminated products that they might have in their freezers. The CDC says people should not eat any recalled Blue Bell brand products and institutions and retailers should not serve or sell them.

Listeria illness generally affects only the elderly, people with compromised immune systems, pregnant women and newborns. The three people who died in Kansas were already hospitalized for other illnesses when they consumed the tainted ice cream.