CEO Ken Powell said General Mills is compelled to act because climate change ultimately will be bad for business. 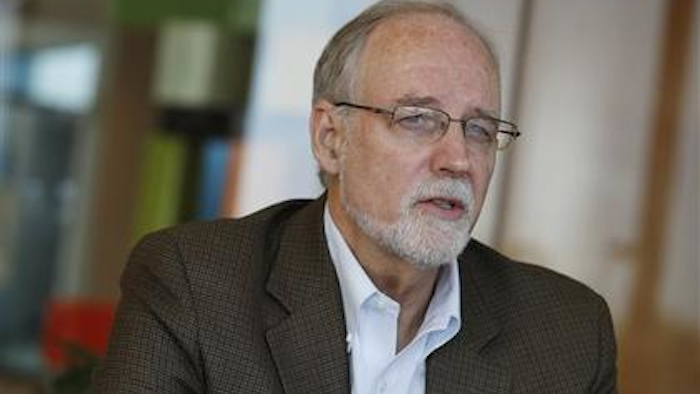 GOLDEN VALLEY, Minn. (AP) — General Mills has set an ambitious goal of reducing its greenhouse gas emissions 28 percent by 2025 — not just within its own operations but from farm to fork to landfill.

CEO Ken Powell, in outlining the plan to The Associated Press ahead of the company's official announcement Monday, said General Mills is compelled to act because climate change ultimately will be bad for business.

General Mills will invest more than $100 million in energy efficiency and clean energy within its own facilities worldwide, and partner with suppliers to foster more sustainable agricultural practices, including sourcing products from an additional 250,000 acres of organic production globally by 2020.

"We think that human-caused greenhouse gas causes climate change and climate volatility and that's going to stress the agricultural supply chain, which is very important to us," Powell said in an interview at company headquarters in suburban Minneapolis. "Obviously we depend on that for our business, and we all depend on that for the food we eat."

Other major food companies have greenhouse gas goals, but General Mills officials said they know of no other major player that has targeted its entire chain — from raw material suppliers to consumers. The company estimates that 92 percent of greenhouse gases associated with that chain come from entities it doesn't control.

Because of its size, General Mills can exert a strong influence over its suppliers and hopes other companies will follow the example, Powell said. But he said the company also knows that climate change, sustainability and the safety of the food supply are increasingly on consumers' minds, and that they want to see action.

"They're setting a big audacious goal, which is going to be good for the business long-term," said Eric Olson, senior vice president with Business for Social Responsibility, a nonprofit that works with more than 250 companies on sustainability and social justice strategies and helped General Mills develop its plan.

Other major global food companies such as Unilever, Mars and Nestle have set greenhouse gas reduction targets for their own operations. But General Mills' plan is unique because it extends all the way up the supply chain, Olson said.

General Mills doesn't plan to threaten to cut suppliers off if they don't make improvements. Many of them already are working on reducing their carbon footprints, and the plan is to partner with them to find ways to accelerate that progress, Powell said.

Getting partners to make changes will be a bigger challenge, he acknowledged.

Expanded organic acreage and promoting agricultural innovations are part of the solution, said Jerry Lynch, the company's chief sustainability officer. Organic agriculture promotes soil that helps farms better endure droughts, heavy rains and pests, pulling more carbon from the air and putting it into the ground in the process.

Better dietary and manure management practices in the dairy industry are other opportunities, Powell said, given that cows emit huge amounts of methane, a more potent greenhouse gas than carbon dioxide.

Olson said the plan will give General Mills "a better supply chain — a supply chain that's better able to respond to the shocks we expect to come with climate change and other changes in the weather."