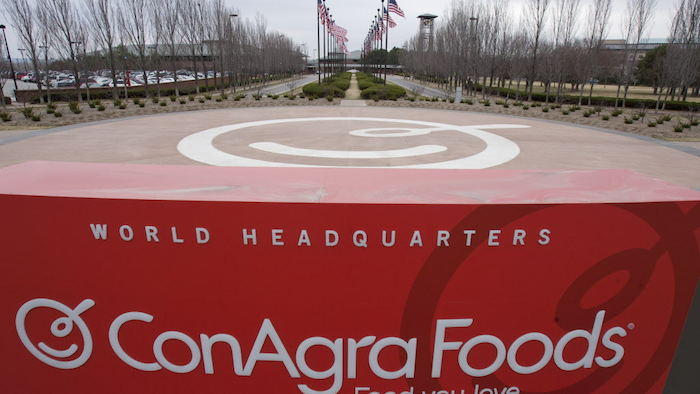 OMAHA, Neb. (AP) — ConAgra employees will learn next week about upcoming changes that the company's chief executive said Friday likely will include jobs cuts and a shuffling of operations that could boost the company's presence in Chicago and lower it in Omaha.

CEO Sean Connolly, who was in Omaha for a shareholders' meeting, said Omaha will continue to play a sizable role for ConAgra. The company has around 3,000 employees at the headquarters campus in Omaha, in Lincoln and across the Missouri River in Council Bluffs, Iowa.

"And when it is, the first group we will communicate details to will be our employees," Kircher said in an email Friday.

Omaha civic and business leaders have been concerned about ConAgra's continued presence since it was reported this summer that the company was negotiating for space inside the Merchandise Mart in Chicago's River North neighborhood.

Omaha Mayor Jean Stothert has said she talked to a ConAgra executive on Tuesday and intends to meet with company representatives again next week.

In 1987, the state approved a package of financial incentives that kept ConAgra from leaving for Tennessee, where such corporate incentives were pioneered and often practiced.

ConAgra has been under pressure by major stockholder Jana Partners, which has said ConAgra's results have been disappointing since it bought store brand business Ralcorp. for $5 billion two years ago. ConAgra said in June that it will sell the unit, preferring to concentrate on improving business for its name brand products, which include Chef Boyardee, Hebrew National hot dogs and Slim Jim meat sticks.