Everyone knows the secret to great whiskey is long, slow aging in oak barrels tucked away in cellars and warehouses for a decades-long nap. 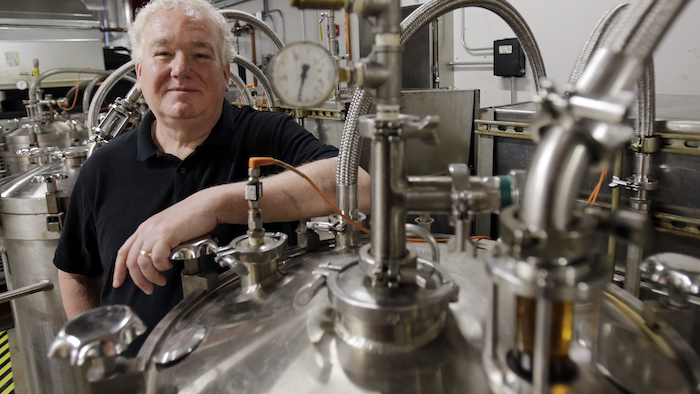 Everyone knows the secret to great whiskey is long, slow aging in oak barrels tucked away in cellars and warehouses for a decades-long nap.

Recently, some distillers have been taking shortcuts, using technology to mimic the effects of long aging — and prompting spirited debate over the merits of the resulting liquors.

"The traditionalists hate us," says Tom Lix, founder and chairman of Cleveland Whiskey Company. "They're all very interested in what's being done, but of course it runs very contrary to not only generations of how it's been processed, but generations of how it's been talked about. All of the marketing has been around how it takes time and how you have to have patience. I just say age is really irrelevant."

It doesn't take rocket science to figure out why new distillers want to speed up their spirits. Starting a new distillery takes a capital investment of tens of thousands of dollars and no banker wants to hear it's going to be years before you start seeing any revenue.

Those who don't want to wait use interventions that speed up the way the whiskey interacts with the oak, a relationship that defines that flavor of whiskey. Some distilleries intensify the wood influence by using smaller barrels or by adding wood chips or staves of oak to the barrels. Both methods increase the surface area of the wood in the oak-to-whiskey ratio.

Others go high-tech, changing the pressure and temperatures in barrels and tanks, and even using sound waves to get the liquor vibrating within them.

There even are at-home options for rapid aging. The Copper Fox Distillery in Sperryville, Virginia, which takes a number of steps to speed aging, including adding toasted apple wood and oak chips to barrels, sells a home kit of a 2-liter charred American white oak barrel along with two 750-milliliter bottles of cask strength spirit and detailed instructions. Another consumer option is www.oakbottle.com, a 750-milliliter oak vessel that resembles a large wine bottle. You fill the vessel with your own wine or spirit to intensify flavors, and the effect can be dramatic.

Some distillers are better at the new approach than others, and Risen says he generally finds the smaller barrel approach to be better than the more tech-y versions. But even just using smaller barrels can be risky. It's "like driving a really fast car. You're talking about very rapid aging. A lot of times what you end up with is a whiskey that tastes woody but also very vegetal. You get a lot of unfinished, unprocessed grain notes."

Risen says he has yet to see "anybody who can convincingly and transparently present a technology that works. It simply is a matter of brute biology and organic chemistry that dictates how whiskey goes from being an unaged distillate to an aged whiskey."

Austin Hope, a California winemaker who recently started making Highspire, a whiskey produced in Kentucky from 100 percent rye, sees things differently. He ages his whiskey in just 130 days, putting the distillate into charred used wine barrels from his Austin Hope Winery Estate and adding toasted staves to punch up the wood influence.

"Purists and authorities alike think I'm off my rocker for making whiskey this way, but I've never been big on following the rules. Better grain means there is a quicker path to great flavor," says Hope, who uses an heirloom rye varietal grown exclusively for Highspire. "Rapid aging isn't about cutting corners in my book. When you're dealing with heirloom rye, it's about determining just the right balance of flavor between the grain and the wood."

Federal regulations require that bourbon be aged in new charred oak barrels, but don't say for how long unless you want to put an age statement on the label. So, Lix puts his raw distillate in the barrels, then promptly pumps it back out and into pressure-capable stainless steel tanks.

The barrels are chopped up, not randomly but with attention paid to weight and moisture content, as well as the shape and the surface area, and measured amounts of the oak then are added to the tank. Large swings in pressure are created that squeeze the wood, forcing the spirit in and out of the pores like squeezing a wet sponge and putting it back in water.

Lix says it takes about 24 hours to produce a bourbon he says has done well in blind tastings against established brands and now is being sold in 12 states.