Toshiba's CEO and eight other executives resigned Tuesday to take responsibility for doctored books that inflated profits at the Japanese technology manufacturer by $1.2 billion over several years. 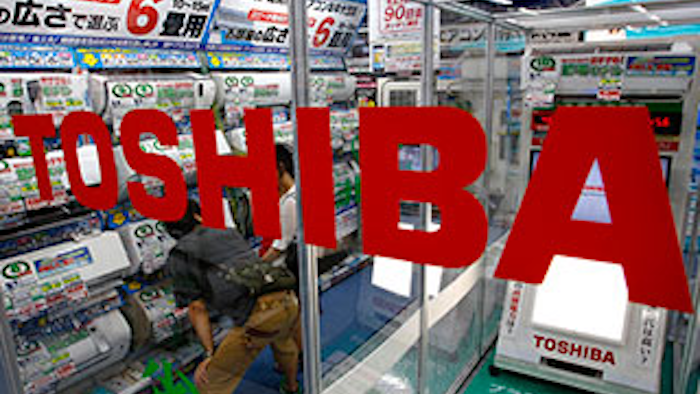 Toshiba Corp. acknowledged a systematic cover-up, which began in 2008. Various parts of the Japanese company's sprawling business including computer chips and personal computers were struggling financially, but top managers set unrealistic earnings targets under the banner of "challenge," and subordinates faked results.

On top of its struggles in electronics, Tokyo-based Toshiba's prospects in nuclear power, one of its core businesses, were shaken after the 2011 Fukushima disaster set off public fears about reactor safety, making new nuclear plants unlikely in Japan. All 48 of the nation's working reactors are now offline.

Bowing deeply before flashing cameras at a news conference, CEO Hisao Tanaka kept his head lowered for nearly half a minute in a gesture meant to convey deep shame and contrition. Tanaka's predecessors, Norio Sasaki, now a vice chairman, and Atsutoshi Nishida, an adviser, also gave up their posts along with six other executives.

"We have a serious responsibility," Tanaka told reporters. The company will need to "build a new structure" to reform itself, he said.

The company said that the fraud continued through the fiscal year that ended in March, and work on revising the accounts to show the complete and true financial picture is not yet finished. It promised an emergency stockholder meeting for September, where it plans to deliver a genuine financial report.

The scandal highlights how Japan is still struggling to improve corporate governance despite recent steps to increase independent oversight of companies.

In 2011, Olympus Corp., which makes medical equipment and cameras, was embroiled in a scandal after its president Michael Woodford, a Briton, blew the whistle on a long-running cover-up of losses at the company.

Loizos Heracleous, Professor of Strategy at Warwick Business School in Britain, said corporate Japan is still lacking in areas such as transparency and board independence compared with the global standard.

"The Toshiba scandal will be seen in the context of the Olympus event, with investors wondering whether there is a pattern of account manipulation in corporate behavior," he said in a commentary. "Japanese regulatory authorities will need to reassure the markets that they are casting a watchful eye over Japanese corporations."

Toshiba has repeatedly apologized to shareholders and customers. It has set up an outside investigation group to analyze why the scandal happened and propose what needs to be done to prevent a recurrence.

The inflation of profits to meet targets was carried out not only on one or two projects, but across the board, sometimes because the projects weren't even breaking even, according to the report of an investigation.

"There was intense pressure to produce results under the challenge initiative," the report said. "So employees felt cornered into resorting to inappropriate measures."

Tanaka will be replaced by Masashi Muromachi, chairman of the board.

In the Olympus case, the company eventually acknowledged it hid 117.7 billion yen ($1.5 billion) in investment losses dating back to the 1990s. Woodford, the CEO, won some praise in Japan for his courage in bringing dubious old-guard company practices to light.

Japanese society is conformist and prizes team work so much it tends to frown upon whistleblowers, and their legal protection lags compared to those in the West.

Long-established companies such as Toshiba tend to have a highly hierarchical structure, making it difficult for employees to challenge top-down decrees.

Other systematic cover-ups at big-name companies have surfaced in Japan over the years. Unlike some Western accounting scandals, those in Japan, including Toshiba's, did not result in any enrichment of individual employees.

Toshiba shares were up 6 percent, recovering recent losses, as investors took the resignations as a sign the company might right itself.