A judge has scheduled an October trial on a Holt County lawsuit aimed at keeping TransCanada Corp. from seizing land to build the Keystone XL oil pipeline. 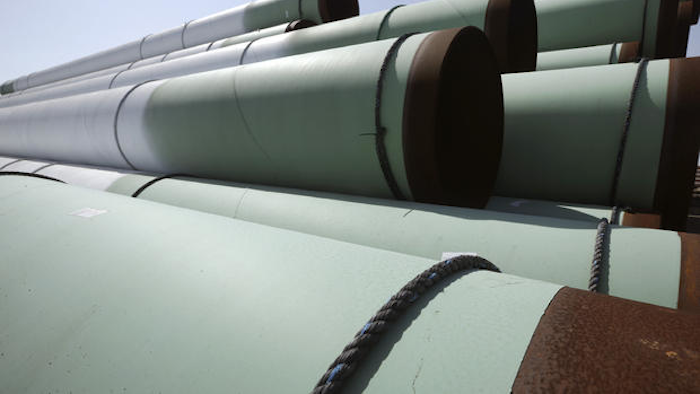 A judge has scheduled an October trial on a Holt County lawsuit aimed at keeping TransCanada Corp. from seizing land to build the Keystone XL oil pipeline.

At a hearing in on Monday in O'Neill, District Judge Mark Kozisek set the nonjury trial date of Oct. 19.

Seven Nebraska landowners filed lawsuits after the state Supreme Court tossed an earlier, similar lawsuit, with three justices saying the plaintiffs in the case didn't have standing to sue because they didn't prove TransCanada was seeking their land.

In January TransCanada filed legal papers in nine Nebraska counties to invoke eminent domain for land that's needed to construct, operate and maintain the pipeline. It would go from Canada through Montana and South Dakota to Nebraska, where it would connect with existing pipelines to carry more than 800,000 barrels of crude oil a day to refineries along the Texas Gulf Coast.

The TransCanada filings prompted the lawsuit in Holt County and a similar one York County. Both challenge the company's legal authority under state law to use eminent domain. Judges in both counties later barred TransCanada from proceeding with any eminent domain actions until the legal challenges have been completed.

Environmentalists and other opponents have argued that any leaks could contaminate water supplies and that the project would increase air pollution around refineries and harm wildlife. Supporters have said those fears are exaggerated, that the pipeline would create jobs and that it would ease American dependence on oil from the Middle East.

The pipeline, first proposed in 2008, still requires presidential approval because it crosses an international border. Nebraska Gov. Pete Ricketts announced Monday that his office had sent a letter to President Barack Obama, urging him to issue a pipeline permit.

Earlier this year, Congress approved legislation to build the pipeline. The president vetoed the bill, and the GOP-run Senate failed to override the veto in March.