Amazon has a plan to create highway lanes in the sky for drones, geofencing different models depending on their abilities to sense and interact with the drones around them. 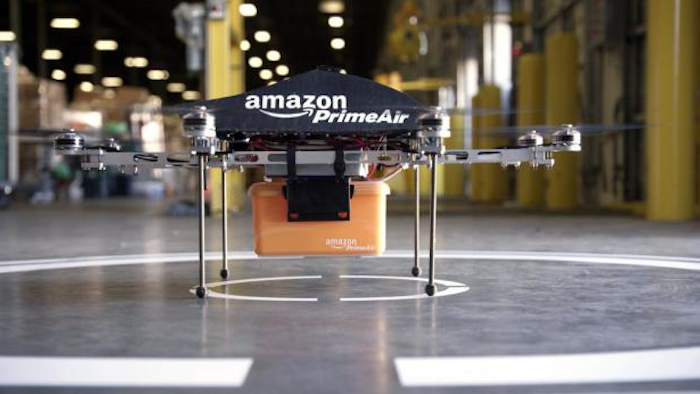 If robots are going to be flocking through the sky in the future, they need to follow some rules.

Amazon has a plan to create highway lanes in the sky for drones, geofencing different models depending on their abilities to sense and interact with the drones around them.

Gur Kimchi, vice president of Amazon Prime Air, announced the company’s plan at NASA’s UTM Convention on Tuesday, July 28. In Amazon’s vision, drone overcrowding can be prevented by what is in essence an onboard air traffic control system, in which all drones that fly over 200 feet must be able to communicate with other aircraft.

What Amazon wants to avoid is “robot smog,” drones colliding with one another because there are so many of them assigned to perform tasks in physical proximity. It could be important as drones become more common.

"We’re putting our foot down,” Kimchi said, according to the Washington Post, “and we’d like everybody to feel an urgent need to come together and create these standards and adapt them.”

Autonomous drones would fly at an altitude of between 200 and 400 feet. Different types would have different right-of-ways based on their abilities to communicate: piloted drones that could announce and log identity and activity over V2V channels would be allowed to fly in the operator’s line of sight at altitudes of under 200 feet in rural areas and limited operation in suburban areas. Drones with autopilot (including the ability to maneuver away from collisions) would be allowed to operate under 400 feet in the operator’s line of sight in suburban areas, with restrictions on urban flight.

The “best” class of drone, with 4D trajectory planning, an on-vehicle Internet connection, geospatial awareness of all other vehicles and hazards operating at over 200 feet, and other automated systems would be allowed to operate in urban areas. This would also be the only type allowed to fly beyond line of sight, at night, and in inclement weather.

The altitutde between 400 and 500 feet would be left free of air traffic in order for that space to serve as a buffer zone between drones and airplanes.

Although there hasn’t been much word on Amazon’s plan to use drones to deliver packages within 30 minutes, this seems to be setting up a framework for country-wide laws that would make facilitating such a service much easier.

Both NASA and Google have proposed similar large-scale drone organization ideas in the past.