Semi-Autonomous Tech, Once For Luxury Cars, Is Rapidly Going Mainstream

Semi-autonomous features used to be confined to luxury cars, but they're quickly migrating to mainstream brands as technology gets cheaper. 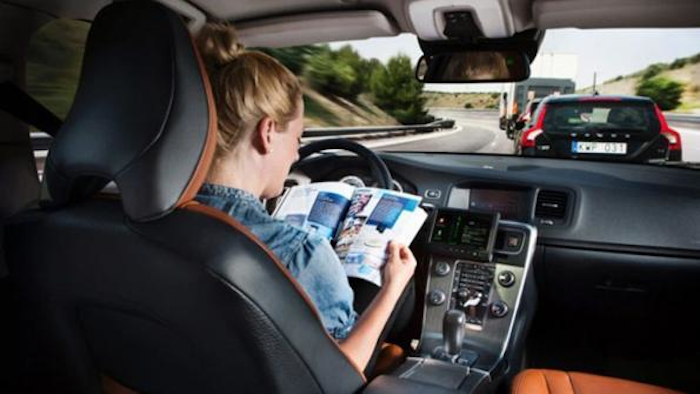 DETROIT - Fully self-driving cars are a few years into the future. But some of the technology that will make them possible is already here.

Automakers are rapidly adding radar- and camera-based systems that can keep a car in its lane, detect pedestrians and brake automatically to avoid a collision. For now, they work with a driver behind the wheel, but eventually, versions of these systems will likely power self-driving cars.

Semi-autonomous features used to be confined to luxury cars, but they're quickly migrating to mainstream brands as technology gets cheaper. Toyota, for example, will offer automatic braking, pedestrian detection and lane departure warning for just a few hundred dollars on all of its vehicles by 2017.

Automakers are also being nudged to add these features by safety advocates like the Insurance Institute for Highway Safety, which gives its top crashworthiness rankings to vehicles with crash prevention technology.

Joseph Gerardi, a communications engineer from Centereach, New York, recently bought a 2015 Nissan Murano specifically for its semi-autonomous safety technology. As part of its $2,260 technology package, Nissan offers emergency braking and adaptive cruise control. The package also has forward collision warning, which uses radar to monitor both the car ahead and the car in front of that one.

Gerardi's wife, Michele, and 4-year-old daughter, Caroline, use the SUV to get around town, so he wanted the most technology he could get for under $40,000.

"We just wanted to get the safest thing possible," he said.

He thinks more people would push for semi-autonomous technology if automakers promoted it, or if dealers had a better understanding of how it works. Gerardi had to call Nissan, for example, to get a complete explanation of the Murano's emergency braking system.

Not everyone likes the self-driving trend.

"I really, really dislike automobiles that think they're cleverer than me," said Will Inglis, who lives outside London and writes about the defence industry. He thinks drivers will come to rely too much on semi-autonomous technology and driving skills will degrade.

But people like Inglis may soon be in the minority. In a recent U.S. survey by the Boston Consulting Group, 55 per cent of drivers said they would likely buy a partially autonomous car in the next five years.

The array of semi-autonomous features now offered on cars can be bewildering. Here are some of the most common:

— Adaptive cruise control: Regular cruise control, which has been around for decades, can keep the car at a set speed on the highway. Adaptive cruise control maintains a set speed as well as a set distance from the carin front of it, and it can slow down or speed up automatically. It started appearing on luxury brands like Mercedes and Lexus about a decade ago. Now, it's available on less expensive models, like the Mazda3 smallcar and the Chrysler 200 sedan.

— Lane keeping: Lane departure warning systems beep or vibrate if the driver leaves a lane. Camera-based lane-keeping systems actually steer the car back into the lane automatically. They have their limits; they might not work in snow or at other times when lane markings aren't clearly visible. Lane keeping started appearing on the market in 2014. Among the vehicles that offer it are the Ford Fusion Titanium, as a $1,200 option, and the Jeep Renegade Limited, as a $995 option.

— Emergency braking: Some forward collision warning systems beep or flash lights to warn the driver if they detect an object. More advanced ones warn the driver and, if the driver doesn't react, apply the brakes. The systems may either bring the car to a complete stop or slow it enough to mitigate damage. The technology, introduced in 2008, is recommended by the federal government. It's already standard on the Volvo XC90 SUV, which can even brake automatically as the driver is turning into an intersection. Other vehicles that offer emergency braking are the Subaru Outback, as part of the $3,090 EyeSight package, and the Toyota Camry XLE, as part of a $2,570 technology and navigation package.

— Self-parking: Self-parking systems can find a spot and automatically park in a parallel or perpendicular spot. The systems, on the market since 2008, are now on many mainstream vehicles. It's a $395 option on the Ford Focus Titanium.

— Highway autopilot: Single-lane highway autopilot is basically just a combination of adaptive cruise control and lane-keeping. It helps keep the car centred in its lane at highway speeds, allowing the driver to cruise with minimal effort. Mercedes, Infiniti and Audi are among those whose systems work in tandem on the highway. Others, including Tesla and Cadillac, are expected to offer advanced autopilot systems soon.