The potential impact of automated driving and of extensively connected cars has pushed aside electric and low-emission vehicles as the major theme in just the two years since the show was last held. 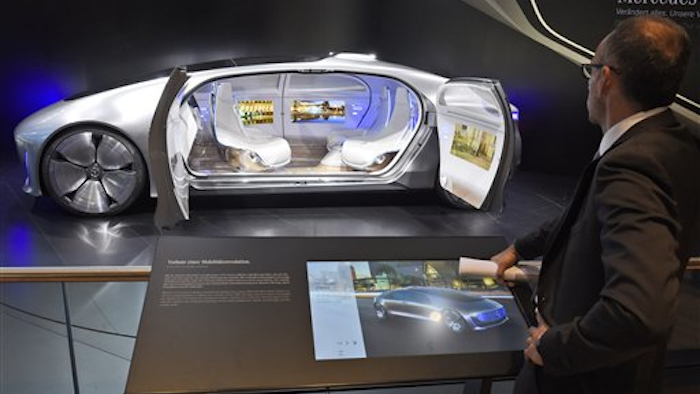 FRANKFURT, Germany (AP) — A sense of impending disruption hangs over all the shiny new cars at this year's edition of the Frankfurt International Motor Show.

The potential impact of automated driving and of extensively connected cars has pushed aside electric and low-emission vehicles as the major theme in just the two years since the show was last held.

New technologies could lead to everything from real-time navigating around a slippery stretch of road, to eliminating the need for a home garage by having cars drive themselves to people who summon them through a mobile app.

The big question among automakers is whether they will be the ones to provide new technologies — and profit from them — or will major tech companies like Google and Apple take a slice of the industry. For now, the two sides are balancing cooperation against competition as they gauge what the future holds.

General Motors CEO Mary Barra succinctly expressed a common view, asserting that "we will see more change in the industry in the next five to ten years than we have in the last 50."

Dieter Zetsche, the head of Daimler AG, described the car and technology companies as being "frenemies."

He said Daimler would welcome competition, which he called "the energy source for our economy." What is important, he said, was for Daimler to keep control of customers' data, to not sell it to third parties, and to obey customer wishes on how it is used. That was his company's rationale for joining with Audi and BMW to buy Nokia's HERE mapping service: "To be sure we define the fate of the data being gathered."

If Apple or Google start making cars — something neither has said they intend to do — "then we are competitors."

Consultancy McKinsey found expectations of rapid change were widespread in the industry. In a survey of 91 industry executives for a report released Wednesday, it found 90 percent "believe that their organization's business model will change or broaden because of connectivity and autonomous driving."

The company also found that more car customers would be willing to switch brands for better connected services. The number that would do so rose from 20 percent in 2014 to 37 percent this year. The company surveyed over 1,000 recent car customers each in Germany, the U.S. and China. "The fact that within just one year the number of people willing to switch car brands for connectivity has almost doubled shows that connectivity is evolving from a should-have to a must-have" for carmakers.

More and more carmakers support the Android Auto and Apple CarPlay interfaces that let people use their smartphone apps, such as navigation or messaging, through their car's dashboard screen. Seven automakers had cars with Android Auto on display in Frankfurt: Audi, Hyundai, Mitsubishi, Volkswagen and its SEAT and Skoda brands, and Opel. General Motors has been connecting cars for years through its OnStar remove roadside assistance service, which it extended to its mass-market entrant in Europe.

Google had no stand at the show, but has shaken up the auto industry by testing a self-driving car prototype. Traditional automakers such as Daimler's Mercedes-Benz, GM and Toyota are also working to gradually automate functions in the car until vehicles become fully capable of driving themselves, possibly by 2025.

A key issue is when some automated functions become legal, and in what countries. Some of these technologies — especially for cars that drive themselves — are already appearing on new models, but are held back by legal and safety concerns. BMW's new 7-Series sedan can park itself with the driver standing outside at the press of a remote button. Cars can already warn drivers when they're leaving their lane, or deploy emergency brakes to avoid a rear-end collision.

Daimler CEO Zetsche sketched out a transformative idea: "You could for instance, think about a typical American neighborhood where you would avoid building 100 garages, getting more houses in, and having the cars being parked outside and come on demand," he said. "That is a relatively simple task and could be accomplished certainly within the next five years. ... It depends on the restrictions."

According to Renault-Nissan CEO Carlos Ghosn, autonomous driving might come in stages as more functions become automated and different jurisdictions allow them. He cautioned, however, that someone will always be behind the wheel able to take over.

He also argued that tech companies would be an integral part of the car industry in the future. "We cannot develop this technology on our own."

Google's engineering director in charge of Android Auto, Patrick Brady, attended the show for discussions withauto partners and said there was a convergence between the industries.

"We are partnering in so many different ways but there are other places where we are competing, and I think that's healthy," he said. "The consumer ultimately wins."

Colleen Barry contributed to this report.