More than 40 workers who weren't injured but lost their jobs after a deadly power plant explosion in Connecticut are hoping the state Supreme Court allows them to sue several contractors for hundreds of thousands of dollars in missed wages. 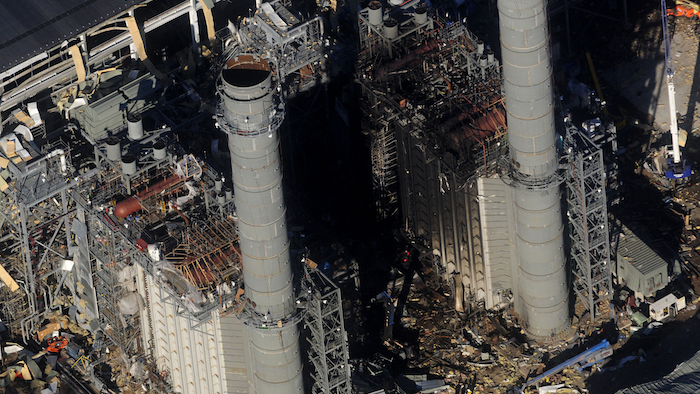 HARTFORD, Conn. (AP) — More than 40 workers who weren't injured but lost their jobs after a deadly power plant explosion in Connecticut are hoping the state Supreme Court allows them to sue several contractors for hundreds of thousands of dollars in missed wages.

The high court on Wednesday is scheduled to hear arguments by lawyers for the contractors and the workers, whose claims were rejected by a trial court judge.

The blast at the under-construction Kleen Energy Systems plant in Middletown on Feb. 7, 2010, killed six workers and injured about 50 others. Authorities said crews were cleaning out the plant's pipes using natural gas at high pressures when something ignited gas that had accumulated in tight quarters.

The Occupational Safety and Health Administration later fined several companies involved in the construction of the plant $16.6 million — the third-highest total imposed for a single incident in the U.S. — after finding 371 safety and workplace violations. But the companies reached agreements with the federal government to eliminate up to 88 percent of their fines, The Hartford Courant reported.

The case before the state Supreme Court involves 45 employees who had expected to work at the plant for six more months or so and earn hundreds of thousands of dollars during the remaining time, said Joseph Barnes, the workers' attorney. They filed lawsuits in 2011 claiming contractors' negligence resulted in the explosion and the loss of their jobs and future wages.

Some workers missed mortgage payments because of the lost income, and others lost work credits for their pension plans, Barnes said. Although they received unemployment compensation, it was only a fraction of what they would have earned, he said.

"This explosion rattled their world in more ways than we can imagine," Barnes said. "These people were left without an income. They lost friends, family members and co-workers."

The defendants include plant owner Kleen Energy Systems LLC and O&G Industries of Torrington, the general contractor during construction. Several other companies involved in the construction also were sued. Damage from the explosion was fixed, and the 620-megawatt plant is operating.

Proloy Das, a lawyer for Kleen Energy Systems who will be arguing the case on behalf of all the defendants Wednesday, declined to comment Tuesday.

In 2013, Hartford Superior Court Judge William Bright granted the companies' motion to dismiss the plaintiffs' claims for economic damages. Bright said that for more than 150 years in Connecticut, state law has limited tort liability to cases involving physical harm to people or property.

"Departing from this requirement ... would create an endless ripple of liabilities arising from the defendants' conduct," Bright wrote. "Public policy is not served by so expanding the defendants' liability to purely economic claims."