President Donald Trump sought Tuesday to avoid blame for Harley-Davidson's decision to move some motorcycle production overseas and threatened to tax the manufacturer "like never before!" as punishment for the planned production shift. 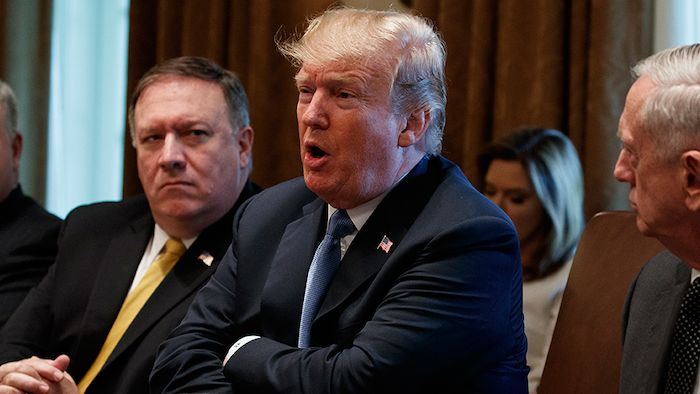 WASHINGTON — President Donald Trump sought Tuesday to avoid blame for Harley-Davidson's decision to move some motorcycle production overseas and threatened to tax the manufacturer "like never before!" as punishment for the planned production shift.

The Milwaukee-based company said Monday it came to its decision because of retaliatory tariffs it faces in an escalating trade dispute between the U.S. and the European Union. The company had no immediate response Tuesday to the president's assertions.

Trump warned the iconic American brand that any shift in production "will be the beginning of the end."

"The Aura will be gone and they will be taxed like never before!" Trump said in one of several tweets Tuesday morning about Harley-Davidson. It was unclear what the president was referring to or how he could impose taxes on a single company.

Trump offered no clarity later in the day when he was asked about tariffs during a White House photo-op with Congress members.

The president has held up the motorcycle maker as an example of a U.S. business harmed by trade barriers in other countries. But Harley-Davidson had warned last year against responding to foreign trade barriers with higher American tariffs, saying the levies could negatively impact sales.

The company reiterated Tuesday that it was moving some production of motorcycles destined for sale in the EU to its existing international facilities to "address the additional tariffs imposed by the EU." It did not respond directly to Trump.

Trump recently imposed steep tariffs on aluminum and steel imported from Canada, Mexico and Europe in his bid to level the trade playing field and reduce trade deficits between the U.S. and its trade partners. But those trade partners feel insulted by Trump and have decided to retaliate.

The U.S. and China are also volleying back and forth over tariffs.

"That was long before Tariffs were announced," Trump said on Twitter. "Hence, they were just using Tariffs/Trade War as an excuse. Shows how unbalanced & unfair trade is, but we will fix it....."

Trump said he's getting other countries to reduce and eliminate tariffs and trade barriers, citing India as an example, and to open up markets.

Harley-Davidson executives met with Trump at the White House last year after Trump canceled a visit to the company's headquarters in Milwaukee because protests had been planned.

"When I had Harley-Davidson officials over to the White House, I chided them about tariffs in other countries, like India, being too high," Trump tweeted. "Companies are now coming back to America. Harley must know that they won't be able to sell back into U.S. without paying a big tax!"

Trump added that the administration is finishing a study on imposing tariffs on cars from the EU.

"A Harley-Davidson should never be built in another country-never!" Trump tweeted. "Their employees and customers are already very angry at them. If they move, watch, it will be the beginning of the end - they surrendered, they quit! The Aura will be gone and they will be taxed like never before!"

Republican Rep. Jim Sensenbrenner, whose Wisconsin district includes Harley's plant in Menomonee Falls, said the EU has a long history of abusive trade practices but urged Trump to address abuses without harming jobs in the U.S.

"It's unfortunate that such a strong Wisconsin company like Harley-Davidson has to bear the brunt of this trade dispute," Sensenbrenner said. "I understand that the President is a tough negotiator, but I urge him to consider a more targeted approach that protects American workers and businesses."