U.S. Factory Orders Fall In May For Second Straight Month

Orders to U.S. factories fell for the second straight month in May, a potentially worrisome sign for American industry. 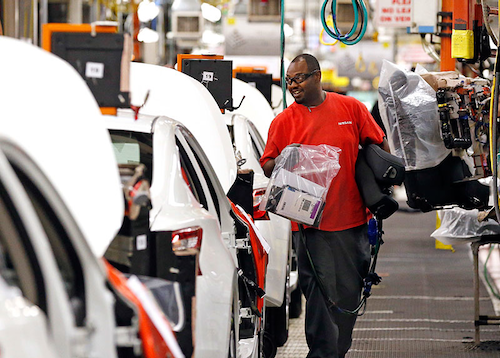 In this April 6, 2016, photograph, a technician carries installation supplies along the assembly line at the Nissan Canton Vehicle Assembly Plant in Canton, Miss. On Wednesday, Oct. 5, 2016, the Commerce Department reports on U.S. factory orders for August. (AP Photo/Rogelio V. Solis)

WASHINGTON — Orders to U.S. factories fell for the second straight month in May, a potentially worrisome sign for American industry.

The Commerce Departments reported Wednesday that factory orders declined 0.8 percent in May, the biggest drop since last November. They fell 0.3 percent in April.

Economists had expected factory orders to drop again in May — but the fall was twice what they'd forecast.

Orders rose a modest 0.2 percent in a category — capital goods excluding aircraft and military equipment — that is closely monitored for signs of businesses' investment plans.

The Federal Reserve reported last month that factory fell 0.4 in May, reversing a sharp increase in April. The Institute for Supply Management reported Monday that its manufacturing index rose last month to the highest level since August 2014.

U.S. factories have rebounded from a slump in late 2015 and early 2016 caused by cutbacks in the energy industry and a strong dollar that made American products costlier overseas.

But overall economic growth has been lackluster. The U.S. economy expanded at a 1.4 percent annual pace from January through March. Consumer spending on long-lasting durable goods dropped at a 1.6 percent annual pace in the first quarter, the weakest showing since the second quarter of 2011.