Democratic Gov. Maggie Hassan on Tuesday vetoed a measure that would have allowed some images of minors to grace alcoholic beverage labels as long as they didn't encourage young people to drink. 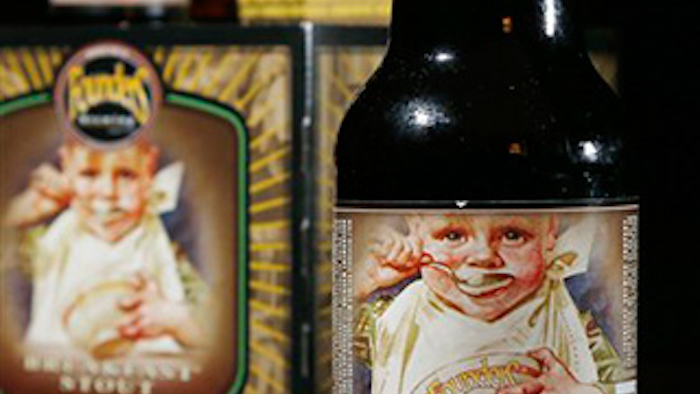 CONCORD, N.H. (AP) — Sorry, baby, your picture isn't going to be on the front of any beer bottles in New Hampshire.

Democratic Gov. Maggie Hassan on Tuesday vetoed a measure that would have allowed some images of minors to grace alcoholic beverage labels as long as they didn't encourage young people to drink.

Republican state Rep. Keith Murphy, who runs a popular tavern, sponsored the bill because he wanted to be able to buy Breakfast Stout, crafted by Founders Brewery Co. in Grand Rapids, Michigan. The beer's label depicts a chubby, Norman Rockwell-esque baby scooping oatmeal into his mouth.

"Substance misuse, including alcohol misuse, continues to be one of the major public health and safety challenges facing us as a state," Hassan said in her veto message. "Moreover, statistics suggest that New Hampshire has among the highest rates of underage drinking in the country."

Murphy said the veto is an overreach and noted that neighboring Massachusetts, Maine and Vermont sell the beer. He also pointed out that a New Hampshire-produced craft beer, Smuttynose Baltic Porter, would have to come off the shelves because its label shows Father Time and a baby.

Murphy's bill would have given the state's Liquor Commission discretion to approve or deny labels. He said he could understand the commission denying a label showing college kids partying but not the Breakfast Stout depiction.

"No reasonable person would believe that this label is intended to appeal to minors in any way," he said.

But the director of enforcement and licensing for the New Hampshire Liquor Commission, James Wilson, said when the bill was introduced in January that the commission already has a "bright line standard" for labeling and was opposed to Murphy's proposal.