The world's biggest beverage maker is struggling to boost global sales volume amid economic volatility overseas and a shift away from soda back at home. To make up for weak volume gains, it's using a variety of tactics, including a focus on smaller bottles. 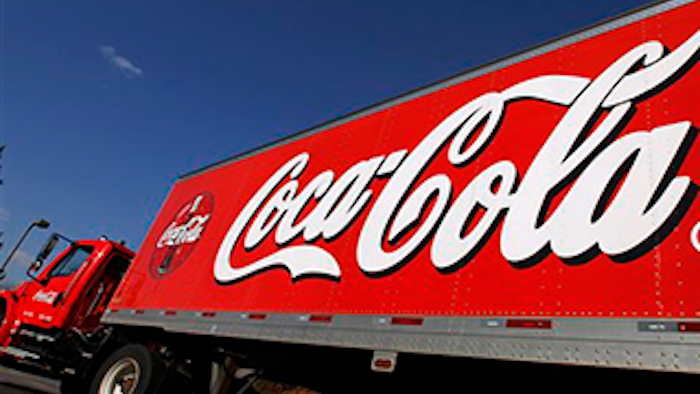 NEW YORK (AP) — Coca-Cola reported a better-than-expected quarterly profit on Tuesday as it worked on trimming costs and fetched higher prices for sodas in North America.

The world's biggest beverage maker has been struggling to boost global sales volume amid economic volatility overseas and a shift away from soda back at home.

To make up for weak volume gains, it's using a variety of tactics, including a focus on "mini-cans" and smaller bottles in the U.S. that are positioned as premium products and help boost revenue.

For the quarter, the company's soda volume in North America was flat, while volume for non-carbonated drinks rose 3 percent. Its "price/mix" for the region, which factors in the price and size of its products, rose 4 percent.

"A lot of it was driven by the smaller cans, which are more premium-priced," said Kathy Waller, Coca-Cola's chief financial officer, in a phone interview.

To keep pace with changing tastes, Coca-Cola has also diversified and owns an array of brands including Honest Tea and Zico coconut water that better fit with prevailing health trends. It also recently began the national rollout of Fairlife, a "premium" milk that promises more protein and less sugar.

Still, about 70 percent of Coca-Cola's global sales volume comes from carbonated soft drinks, according to Ali Dibadj, a Bernstein analyst.

For 2014, Coca-Cola said volume rose 2 percent, including a 1 percent boost in carbonated soft drinks. That was in line with its performance the previous year.

The shift away from soft drinks in the U.S. comes amid a proliferation of options in the beverage aisle. Between 2001 and 2006, an internal study by Coca-Cola found that 30 percent of the industry's growth was driven by categories that hadn't existed five years earlier.

Soda also has a bad reputation for fueling weight gain, and has been criticized by health advocates at home and overseas. In Mexico, Coca-Cola said overall volume declined by 1 percent for the quarter, although the company did not specify how much soda volume fell. Performance in the country has been hurt by a tax on sugary drinks that went into effect last year.

In a statement, CEO Muhtar Kent said the company sees 2015 as a "transition year," noting that it would take time for the company to see the benefits of its recently announced efforts. The company has said it's working on reducing costs by $3 billion a year. Earlier this year, it said it was cutting up to 1,800 jobs as part of the push.

For the period ended Dec. 31, Coca-Cola Co. said it earned $770 million, or 17 cents per share. Excluding one-time items such as unfavorable currency exchange rates and expenses related to its cost-cutting plan, it earned 44 cents per share. That topped the 42 cents per share analysts expected, according to Zacks Investment Research.