The Supreme Court ruled Monday that a 66-year-old program that lets the government take raisins away from farmers to help reduce supply and boost market prices is unconstitutional. In an 8-1 ruling, the justices said forcing raisin growers to give up part of their annual crop without full payment is an illegal confiscation of private property. 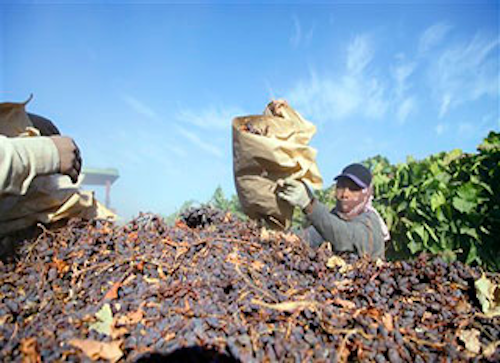 WASHINGTON (AP) — The Supreme Court ruled on Monday that the government can't force raisin farmers to give up part of their annual crop for less than it's worth, a victory for conservative groups that hailed the decision as a win for private property rights.

The justices ruled 8-1 that a 1940s-era program born out of the Great Depression is unconstitutional because it allows federal officials to seize personal property from farmers without fully compensating them, even though the goal is to benefit farmers by stabilizing market prices.

The court sided with California farmers Marvin and Laura Horne, who claimed they were losing money under a program they called outdated and ineffective. They had been fined $695,000 for trying to get around it.

Writing for the court, Chief Justice John Roberts said the government must pay "just compensation" when it takes personal goods, just as when it takes land away.

Roberts rejected the government's argument that the Hornes voluntarily chose to participate in the raisin market and have the option of growing different crops if they don't like it.

"'Let them sell wine' is probably not much more comforting to the raisin growers than similar retorts have been to others throughout history," Roberts said. "Property rights cannot be so easily manipulated."

The case was considered one of the most important property disputes to reach the high court since 2005, when the justices ruled that the city of New London, Connecticut, could use the power of eminent domain to hand private homes or businesses to developers to help stimulate economic improvement. That case sparked a backlash in many states and led more than 40 state legislatures to pass laws protecting property rights.

By contrast, Monday's ruling in the raisin case was seen as a decisive win for property-rights advocates seeking to limit government power.

"The decision confirms what should be obvious: the government cannot come and take your personal property without compensation, whether raisins or other property, on the ground that the taking is for your own good," said J. David Breemer, attorney for the Pacific Law Foundation, a conservative group that backed the Hornes.

The program was authorized by a 1937 law that allows the U.S. Department of Agriculture to keep prices for raisins and other crops steady by helping to manage supply. A 1949 marketing order allowed farmers to form a committee that decides how much of the raisin crop handlers must turn over to the government each year.

These raisins would be placed into a reserve pool to be sold outside the open market, used for the school lunch program or given away to charities and foreign governments. Any profits from these reserve sales would go toward funding the committee and anything left over went back to the farmers.

The Hornes refused to participate in the program in 2003, when farmers were required to give up 47 percent of their crop but received far less in return than their costs of production. They also refused to cooperate in 2004, when other farmers gave up 30 percent of the crop in 2004 and were paid nothing.

The Hornes' lawyer, John O'Quinn, called the ruling "a personal vindication" for the couple and "an important win for personal liberty."

Raisin prices have been stable recently, and farmers have not been ordered to put crops in reserve since 2010.

Only a small number of other crops are regulated in the same way, though federal officials say most programs are not active. Those include California dried prunes, California dates, California almonds, tart cherries, walnuts and spearmint oil.

A USDA spokesman said agency officials were reviewing the ruling and had no immediate comment.

Roberts said the government could have restricted raisin sales by limiting production, which is how the vast majority of crops programs work.

In a separate opinion, Justice Stephen Breyer agreed that the Hornes were entitled to be properly paid for their crops, but he said the case should be sent back to a lower court to decide whether they would have been owed any money had they complied with the program.

Justice Clarence Thomas took issue with Breyer's point and wrote separately to say that sending the case back to figure out compensation "in this case would be a fruitless exercise."

Justice Sonia Sotomayor was the only dissenter. She said the program did not deprive the Hornes of all property rights, it just limited the amount of potential income they could earn from it.