Starbucks: Prices for Some Drinks to Rise by 5 to 20 Cents

A small and large brewed coffee will each go up by 10 cents in most areas of the country, Starbucks says. That would bring the price of a large coffee to $2.45 in most U.S. stores. 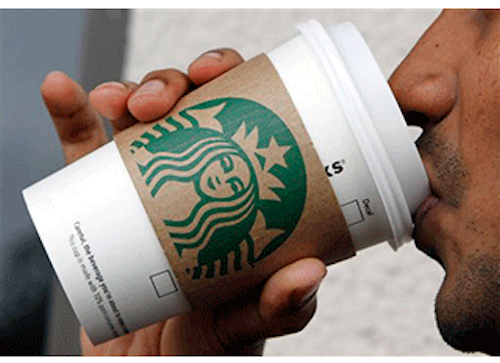 NEW YORK (AP) — Starbucks is raising prices again starting Tuesday, with the increases ranging from 5 to 20 cents for most affected drinks, the company said.

The Seattle-based company also raised prices nationally about a year ago.

A small and large brewed coffee will each go up by 10 cents in most areas of the country, Starbucks says. That would bring the price of a large coffee to $2.45 in most U.S. stores.

Some other coffee sellers are cutting prices. Last week, The J.M. Smucker Co. said it would cut prices for most of its coffee products because of declines in future prices for unroasted coffee beans. In an emailed statement Monday, Starbucks Corp. said coffee costs are only part of its expenses, which also include rent, labor, marketing and equipment.

The statement said the company continually evaluates pricing to "balance the need to run our business profitably while continuing to provide value to our loyal customers and to attract new customers."

A representative for Starbucks, Lisa Passe, said the price increases are expected to impact less than 20 percent of customers. But that estimate is based on current purchasing patterns, which include more cold drinks given the warmer weather.

The price hikes mostly affect hot drinks, Passe said. That means the percentage of customers affected by the higher prices would likely rise as people start buying warmer drinks as the weather cools.

Prices are not being raised on any food items, Passe said. Starbucks has been trying to get more customers to buy food items like sandwiches in hopes of driving sales.