Reasons for the trend are apparent in a new national survey of 5,900 Americans released in November by the American Humane Association showing overwhelming popular support for the humane treatment of farm animals and humanely raised foods. 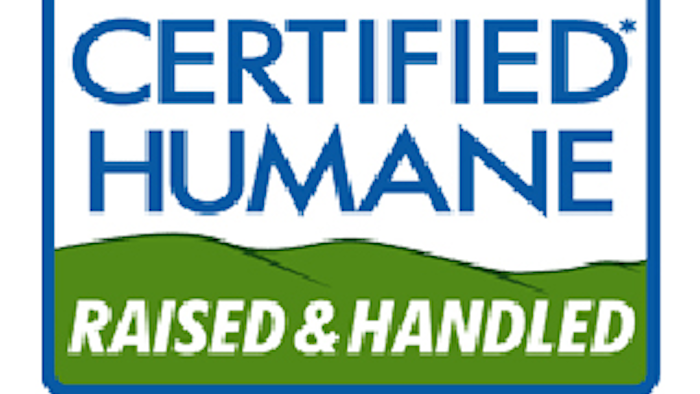 ATLANTA (PRNewswire-USNewswire) — One of the most dramatic new trends in U.S. agriculture is the move by farmers, ranchers and producers to humane certification. American Humane Association, by far the nation's largest humane certifier, revealed today at the 2015 International Production and Processing Expo in Atlanta that the number of farm animals covered under its American Humane Certified™ program has jumped more than 1,000 percent in just four years, covering well over 1 billion animals – nearly 1 in every 8 animals on U.S. farms and ranches.

In 2011 American Humane Association was covering some 100 million farm animals with its evidence-based, independently audited American Humane Certified program.  Today, that number has increased more than tenfold, and includes nearly 10,000 farms from small mom-and-pop operations to some of the best-known national producers.

"Americans are increasingly interested in where their food comes from and how farm animals are treated," said Dr. Robin Ganzert, president and CEO of American Humane Association. "The welfare of animals has always been a key issue for America's farmers and with growing demand from the public for humanely raised foods, enlightened farmers, ranchers and producers are seeking trustworthy, independent, science-based humane certification to verify good practices to retailers and the public."

Underlying reasons for the trend are apparent in a new national survey of 5,900 Americans released in November by American Humane Association showing overwhelming popular support for the humane treatment of farm animals and humanely raised foods. The 2014 Humane Heartland™ Farm Animal Survey, the second conducted by American Humane Association reveals that more than nine in ten respondents (94.9%) were very concerned about farm animal welfare, up from 89 percent in the 2013 study.  More than three-quarters (75.7%) stated that they were very willing to pay more for humanely raised eggs, meat, and dairy products, up from 74 percent last year. And for the second year in a row, in a ranking of the importance of food labels, "humanely raised" scored highest.  Impediments to people's choosing humane products was also explored: While one-third of those surveyed (35.3%) said they did purchase humanely raised foods, more than half (54.6%) said they were either not available (35.6%) or too expensive (19%).  Nearly one in ten (9%) said they did not know the difference.  Full results of the 2014 survey can be found here.

In November, American Humane Association went to Capitol Hill to urge Americans to set a humane table and support humane farm practices. Joined by leaders of major organizations involved in food production, as well as small, medium and large farmers and producers who have committed to raising animals humanely, "The Humane Table" congressional briefing celebrated and gave thanks to American farmers and ranchers who not only put food on our families' tables, but who put the "heart" in "heartland" by providing food that is safe, abundant, affordable and humanely raised under ethical, commonsense and evidence-based standards. American Humane Association also called on the more than 95 percent of Americans who do choose to eat eggs, meat and dairy products to set a humane table this year with humanely raised foods and support producers committed to farm animal welfare. To help, American Humane Association offers a list of certified producers that can be found here and also released a new television PSA urging support of humanely raised foods.

American Humane Association, the country's first national humane organization, was founded around the issue of farm animal welfare in 1877 and has been at the forefront of improvements and protections for children, pets and farm animals for 138 years (see historic timeline). With a history of working positively and collaboratively with farmers, ranchers, animal advocates and the American public to create moderate, mainstream and commonsense solutions that work for both animals and people, in 2000 American Humane Association created the nation's first farm animal welfare certification and third-party auditing program with more than 200 science-based standards covering everything from adequate space to air quality, heat and lighting, humane treatment, and the ability for animals to be animals and express the natural behaviors of their kind. These standards for the resulting American Humane Certified™ program were built upon the internationally accepted values of the Five Freedoms, created by the Royal Society for the Prevention of Cruelty to Animals, as well as input from animal science experts, veterinarians and other animal husbandry specialists. These evidence-based standards are reviewed regularly by an independent Scientific Advisory Committee made up of some of the world's leading experts and animal advocates, including farm animal welfare pioneer Dr. Temple Grandin.

"Americans have the safest, most abundant, and economical food supply in the world," said Dr. Ganzert. "Now people want to ensure that it is humane, as well.  We are deeply gratified to see rapidly increasing numbers of farmers, ranchers and producers stepping forward voluntarily to demonstrate their commitment to animal welfare – and to the American public."