Study: Many Dark Chocolates Contain Milk Despite it Not Being Listed on Label

Does your sweetheart have a milk allergy? You may want to hold off on the dark chocolate this Valentine's Day. Although dark chocolate generally isn't made with milk, a new FDA study shows that there are traces of milk in some candies. 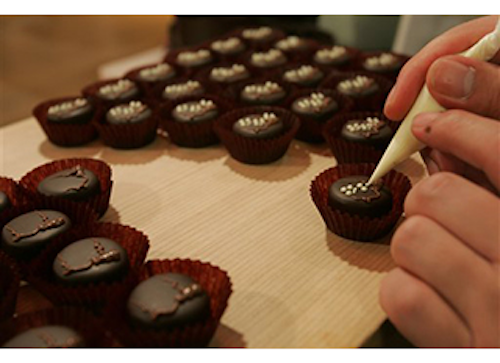 WASHINGTON (AP) — Does your sweetheart have a milk allergy? You may want to hold off on a dark chocolate Valentine.

Although dark chocolate generally isn't made with milk, a new Food and Drug Administration study released Wednesday shows that there are traces of milk in some of the candies.

"This can be a problem, since even one small bite of a product containing milk can cause a dangerous reaction in some individuals," says FDA researcher Binaifer Bedford.

The agency would not say what brands of bars tested positive for milk.

Milk is one of several allergens required to be labeled on food packages. The agency tested dark chocolate after hearing from consumers who said they had eaten it and experienced harmful reactions.

The FDA said milk can inadvertently end up in dark chocolate if it is manufactured on the same equipment that makes milk chocolate.

The bars tested were purchased from different parts of the country and from several different manufacturers.

When it comes to allergens, labels can be confusing. Some foods are labeled that they "may contain traces of milk," but a consumer doesn't know how much milk that is, or whether it's enough to cause a reaction. The FDA said the dark chocolate study showed that 6 out of 11 tested products that were labeled as containing traces of milk "contained milk at detectable levels high enough to potentially cause severe reactions in some individuals."

The FDA says concerned consumers should contact food manufacturers to find out how they control for allergens. If they experienced an allergic reaction, they can call FDA or report it online.