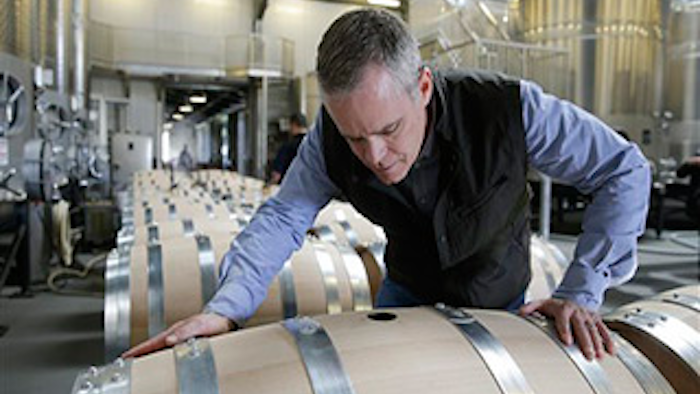 LOUISVILLE, Ky. (AP) — Kentucky's bourbon boom is showing no signs of peaking as distilleries keep up a production pace unmatched for decades.

It was also a boom year for production: 1.3 million bourbon barrels were filled, the most since 1970, the association said, making 2014 the third straight year the million-barrel production mark was reached. In 1999, production totaled 485,020 barrels.

To meet growing demand, Kentucky's bourbon industry is in the midst of a big expansion. KDA says its members have completed or plan more than $1.3 billion in capital projects as part of a 10-year growth spurt.

It's a continual gamble for whiskey makers to gauge demand years from now for bourbon that's just been put in barrels for aging.

Straight bourbon whiskey ages in charred oak barrels a minimum of two years, though the average time to reach maturity is four years or more. Many popular super-premium brands age six years or longer. Those are the toughest to stock in bars, restaurants and liquor stores.

As Pacult sees it, the distillers are playing a winning hand as they put away more whiskey to mature.

"Are they overplaying their hand by expanding? I tend to think not," Pacult said in a phone interview. "I tend to think that the growth in American spirits is going to continue for the foreseeable future."

Heaven Hill Distilleries Inc. is among the producers who are feeling bullish about bourbon's prospects, and putting their money into more production.

"We're not sure if it's enough, frankly," he said.

So the company behind Evan Williams bourbon is planning another expansion of its main Louisville distillery. The new project will allow Heaven Hill to boost production by about one-third, Shapira said. The approximately $30 million expansion includes more warehouses to age the whiskey.

"Sometimes when you see the demand for our products and how it's increased over the last few years, you have to pinch yourself," he said.

Overall bourbon production in Kentucky has surged by more than 170 percent since the turn of the century, the distillers' association said in releasing the latest figures for the signature Kentucky product. Kentucky is home to 95 percent of the world's bourbon production.

"This truly is the golden age of bourbon," said Eric Gregory, the association's president.

The bourbon industry is holding a pair of aces as it stockpiles more whiskey for the future — cashing in on a cocktail craze that shows no signs of abating, coupled with growing international demand for the American spirit, Pacult said.

Exports of bourbon and Tennessee whiskey topped $1 billion in 2014 for the second straight year, according to the Distilled Spirits Council.

Mixed together, U.S. revenues for bourbon and Tennessee whiskey rose by 9.6 percent to $2.7 billion last year, it said.

The industry lumps bourbon and Tennessee whiskey into one category. Both are produced in the same way with similar ingredients, but Tennessee whiskeys are charcoal mellowed before going into the barrel to age, while bourbon isn't.