Secretary of State Kate Brown has certified recount results showing the defeat of a ballot measure to require labels on genetically modified foods, officially making Oregon the fourth state in the West to reject the idea. 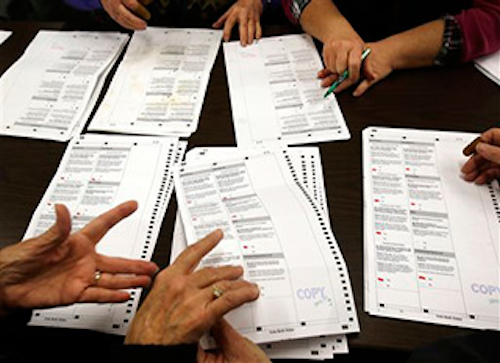 SALEM, Ore. (AP) — Secretary of State Kate Brown has certified recount results showing the defeat of a ballot measure to require labels on genetically modified foods, officially making Oregon the fourth state in the West to reject the idea.

Brown certified the final numbers Monday showing Measure 92 was defeated by 837 votes out of more than 1.5 million cast — a margin of less than 0.06 percent.

The close margin automatically triggered the recount. The hand tally showed an additional 167 votes, with a net gain of 25 no votes.

Proponents conceded defeat last week but vowed to continue their efforts to enact labeling mandates. They have not said whether they'll make another try in Oregon in 2016, when they potentially would be buoyed by the larger, more liberal electorate of a presidential election.

"We will continue working until Oregonians and all Americans — like the residents of 64 other countries around the globe — have the information they need to make informed choices about the food that they feed their families," the Yes on 92 campaign said after conceding last week.

Labels for foods made with genetically modified organisms, or GMOs, have been a priority for natural-food companies and for consumers who prefer organic food. However, there's little science that says genetically engineered products are unsafe.