Flying, at least for non-millionaires, has gotten grimmer in recent years. But things are looking up on the drinks cart. Alaska Air, for example, took a crafty approach, teaming with local distilleries Sun Liquor in Seattle and Bendistillery in Oregon. 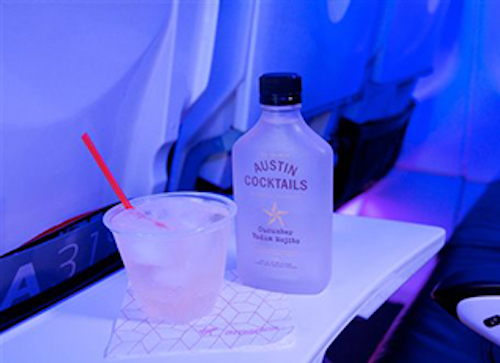 Flying, at least for non-millionaires, has gotten grimmer in recent years. But things are looking up on the drinks cart.

"You can actually get a decent drink," says Anthony Caporale, director of beverage studies at the Institute of Culinary Education in New York. "I started a few years back seeing small-batch bourbons on flights. Now I think it's uncommon for me to get on a major airline that doesn't have some sort of craft American whiskey."

All three airlines also are tapping into the craft beer trend, along with JetBlue and Southwest Airlines, which recently introduced rotating seasonal beers from Leinenkugel's in Chippewa Falls, Wisconsin.

Adding homegrown products to give passengers a more personalized experience is one change. Another is making it easier to order those fancy, local drinks. Virgin America, Norwegian and Air New Zealand allow passengers to order beverages via the inflight entertainment systems, says Raymond Kollau of AirlineTrends.com. On Virgin America you can even use the system to buy a drink for another passenger and follow up with a seat-to-seat chat function.

Drinks writer Camper English, who keeps up with airline drinks menus at his site Alcademics.com, has been tracking the advent of better bourbons like Bulleit and better tequilas such as Avion, as well as regional selections like those offered on Alaska Air.

Still, prices have risen along with selection, he says, and there are a lot of pretty sad cocktails made of canned margarita and bloody mary mixes. "I would guess as we see an increase in the better-quality pre-mixed cocktails on the ground like the Crafthouse brand, we'll begin to see more of them in the sky," says English.

Space and time remain challenges in serving at 35,000 feet. There's not a lot of room to show off your cocktail shaker skills in the economy aisle.

At Alaska Air, if you want a Moscow mule you order the ingredients — ginger ale, vodka and lime wedges — and make the drink at your seat, following, if you wish, the recipe spelled out on their website.

Another challenge is the way altitude — cabins typically are pressurized at 6,000 to 8,000 feet — plus low cabin humidity change your sense of taste and smell. That's a big problem for food, but less so for liquor, which "is quite robust," says Caporale.

Hal Landvoigt, director of winemaking at Precept Wine in Seattle, has made a science of wine flights — literally. To understand how air travel influences wine drinking, he took multiple wine blends onto a flight — all in TSA-approved 3-ounce bottles — then tasted them before take-off and again during the flight to see if there was a difference.

There is, he says. He followed up by tinkering with the bottles at his seat, playing with sugar and acidity levels to see what worked best.

Landvoigt also ran two in-air tastings for Alaska Air, asking passengers to pick the blend they liked best and came up with a white and a red for inflight consumption only. With reds, a little more sweetness and a little more oak presence seems to work out well. Whites also needed to be a little sweeter and little less acidic than if on the ground.

If you're still worried about the quality of your cabin cocktail, English has a tip: Check out the airline lounge. Airport bars are improving at a faster pace, he says, with several hiring local mixologists to develop cocktails and train lounge bartenders to make them properly.