Diamond Foods Inc. effectively wiped away $56.5 million in profit from its books Wednesday after it restated two full years of results. The San-Francisco based snack company is restating its results for 2010 and 2011 after an internal investigation last year found that the company improperly accounted for payments to walnut growers, which skewed its financial results. 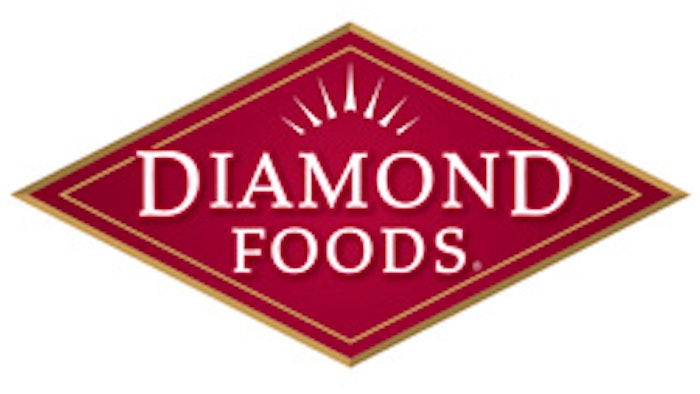 (AP) — Diamond Foods Inc. effectively wiped away $56.5 million in profit from its books Wednesday after it restated two full years of results.

Its battered stock fell another 20 percent in after-hours trading on the news.

The San-Francisco based snack company is restating its results for 2010 and 2011 after an internal investigation last year found that the company improperly accounted for payments to walnut growers, which skewed its financial results.

Diamond suffered mightily from the fallout. Its stock price sank on concerns about the payments, it lost its bid to buy the Pringles brand from Procter & Gamble Co. and it eventually replaced its CEO and chief financial officer over the issue.

The company, which makes Emerald Nuts and Kettle Chips, said Wednesday that the restatements are an important step toward it becoming current in its financial reporting.

Diamond and its audit committee determined that grower payments of $20.8 million and $61.5 million previously accounted for in fiscal 2011 and 2012, were not accounted for in the correct periods. The corrections were made in the reports for fiscal 2010 and 2011.

After adjusting for all the special items, Diamond earned 53 cents per share for the three periods combined versus $1.54 per share in the prior year.

"Clearly, the results for the first three quarters of 2012 demonstrate that Diamond faced challenges," said CEO Brian Driscoll, who joined the company in May. "However, we have a strong brand portfolio to build upon and have launched a new strategic direction with a focus on investing in innovation and brand building, significantly improving our cost structure and rebuilding our walnut supply."

The company also said that two of its board members would step down and a walnut grower would join its board.

Diamond said John Gilbert and Richard Wolford have decided to step down from the board immediately. The company has appointed William Tos Jr. to its board. The moves reduce the total size of its board to 11 from 12.

Tos is a long-time Diamond walnut grower and former member of the board for Walnut Growers Inc., the cooperative that was the predecessor to Diamond Foods.

Shares of Diamond Foods stock dropped $3.90 to $15.60 after hours. As of its price at market close Wednesday of $19.50, Diamond's stock had lost nearly 80 percent of its value since the fall of 2011 when news of the payment issues surfaced.