Americans get too many calories from soda. But what about alcohol? It turns out adults get almost as many empty calories from booze as from soft drinks, a government study found. Soda and other sweetened drinks — the focus of obesity-fighting public health campaigns — are the source of about 6 percent of the calories adults consume, on average. 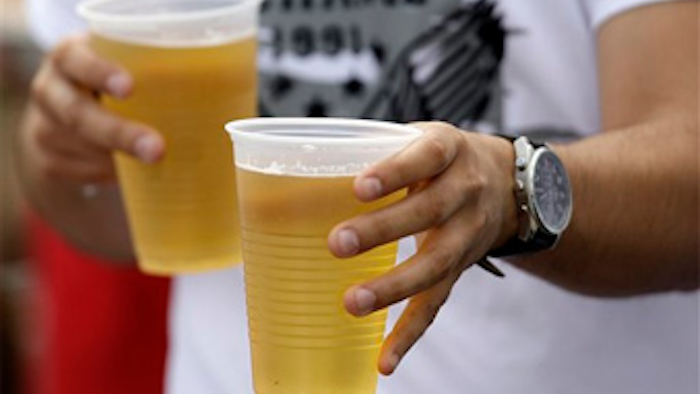 NEW YORK (AP) — Americans get too many calories from soda. But what about alcohol? It turns out adults get almost as many empty calories from booze as from soft drinks, a government study found.

Soda and other sweetened drinks — the focus of obesity-fighting public health campaigns — are the source of about 6 percent of the calories adults consume, on average. Alcoholic beverages account for about 5 percent, the new study found.

"We've been focusing on sugar-sweetened beverages. This is something new," said Cynthia Ogden, one of the study's authors. She's an epidemiologist with the Centers for Disease Control and Prevention which released its findings Thursday.

The government researchers say the findings deserve attention because, like soda, alcohol contains few nutrients but plenty of calories.

The study is based on interviews with more than 11,000 U.S. adults from 2007 through 2010. Participants were asked extensive questions about what they ate and drank over the previous 24 hours.

—On any given day, about one-third of men and one-fifth of women consumed calories from beer, wine or liquor.

—Averaged out to all adults, the average guy drinks 150 calories from alcohol each day, or the equivalent of a can of Budweiser.

—The average woman drinks about 50 calories, or roughly half a glass of wine.

—Men drink mostly beer. For women, there was no clear favorite among alcoholic beverages.

—There was no racial or ethnic difference in average calories consumed from alcoholic beverages. But there was an age difference, with younger adults putting more of it away.

In September, New York City approved an unprecedented measure cracking down on giant sodas, those bigger than 16 ounces, or half a liter. It will take effect in March and bans sales of drinks that large at restaurants, cafeterias and concession stands.

There are no plans for that, city health department officials said, adding in a statement that while studies show that sugary drinks are "a key driver of the obesity epidemic," alcohol is not.

Health officials should think about enacting policies to limit alcoholic intake, but New York's focus on sodas is appropriate, said Margo Wootan, director of nutrition policy for the Center for Science in the Public Interest, a public health advocacy group.

Soda and sweetened beverages are the bigger problem, especially when it comes to kids — the No. 1 source of calories in the U.S. diet, she said.

"In New York City, it was smart to start with sugary drinks. Let's see how it goes and then think about next steps," she said.

However, she lamented that the Obama administration is planning to exempt alcoholic beverages from proposed federal regulations requiring calorie labeling on restaurant menus.

It could set up a confusing scenario in which, say, a raspberry iced tea may have a calorie count listed, while an alcohol-laden Long Island Iced Tea — with more than four times as many calories — doesn't. "It could give people the wrong idea," she said.