Top Baristas Duke It Out for National Championship

The caffeinated concoctions sound like something out of a mad scientist's lab: coffee infused with bacon or caramelized tangerine; spiced orange reduction or liquefied cheesecake. After months of preparation and percolation, the country's top baristas are giving it their best shots in Beantown. 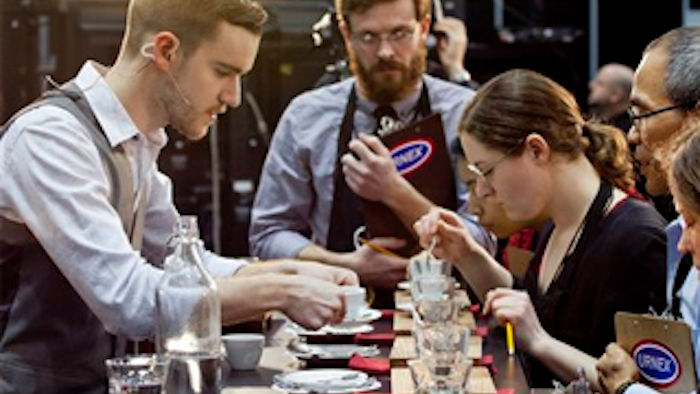 BOSTON (AP) — The caffeinated concoctions sound like something out of a mad scientist's lab: coffee infused with bacon or caramelized tangerine; spiced orange reduction or liquefied cheesecake.

After months of preparation and percolation, the country's top baristas are giving it their best shots in Beantown.

The United State Barista Championship got started Thursday at the Boston Convention Center and runs through Sunday, when one contender's brewing brilliance will reign supreme.

Fifty of the county's best baristas get 15 minutes to prepare and serve four espressos, four cappuccinos and four signature beverages of their choice to a panel of judges. Competitors are judged on taste, procedure, consistency, cleanliness and technical details including whether they are wasting precious coffee.

Competitors are expected to demonstrate their art and skill to deliver the best coffee and espresso-based beverages to customers.

"Great coffee preparation is at the heart of the competition, certainly, but it is not the only thing that barista competitors are judge on," said Tara Shenson of the Specialty Coffee Association of America, which organizes the contest. "So ultimately, we are looking for them to create a certain experience as well, just the same way you would expect the same specialty in your local cafe."

The customer experience can be just as important as the coffee, Shenson said. The competitor's choice of ambient music, dress and how they tell the story of their beverages can factor into their performance.

The baristas qualified for the national championship after coming on top at six regional contests. The winner of the national title will bag an all-expenses-paid trip to the World Barista Championship next month in Melbourne, Australia.

Katie Carguilo of New York City's Counter Culture Coffee is the reigning U.S. champ. The New Hampshire native making her third appearance in the competition said being a top barista requires much more than a casual interest in coffee.

Being a barista can be a very challenging and very rewarding, said Dan Streetman, chairman of the Barista Guild of America and head judge at the competition.

"Most barista work in a cafe where they are the first person someone has to interact with every day and, I don't know about you, but for me, I'm not a very happy person before I've had my coffee," he said. "And sometimes that interaction can be a little bit tough, but a great professional barista should be able to smooth that over and give someone a really great beverage and make them smile before they even start their day."

The barista competition, now in its 10th year, is much more than an entertaining part of the premium coffee industry, which accounts for 37 percent of the volume of coffee sold in the United States and half of an industry valued at about $30 billion annually, according to the industry group.

"One of our slogans is that great coffee doesn't just happen, and so this is a great way for us to work at it and to really put it out there to improve what's in the cup of specialty coffee customers every day," Streetman said.

So what exactly is great coffee?

"It's kind of like drinking a really fine wine or a fine malted scotch — you drink it and you notice really intricate nuances, and it's something that can be a compelling experience for 20 minutes, rather than just, you know, a medicinal 'I need caffeine' kind of experience," Streetman said.

A portion of proceeds from the limited-edition Busch Light will go to a nonprofit that provides aid to family farms.
May 20th, 2022
Follow Us
Most Recent