This Mississippi River city is proud of its barbecue, its fried chicken, its stereotypical soul food. When told that there's a place in Memphis that makes standout Koreanfood like soups and noodle dishes with meat and seafood, some may scoff. 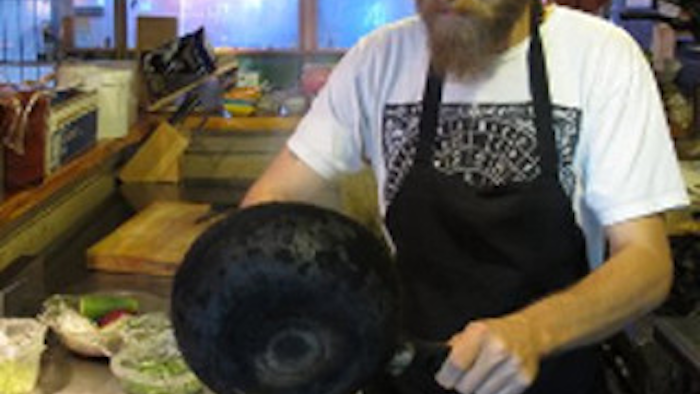 MEMPHIS, Tenn. (AP) — This Mississippi River city is proud of its barbecue, its fried chicken, its soul food. But the food scene here is often stereotyped because of it.

Those foods are what tourists typically obsess over, standing in line at Central BBQ for smoky ribs or Gus's Fried Chicken for juicy drumsticks. When told that there's a place in Memphis that makes standout Koreanfood like soups and noodle dishes with meat and seafood, some may scoff.

But Crazy Noodle is real, and it might be proof that people in intensely Southern cities like Memphis, where collard greens are made correctly and macaroni and cheese is listed on some menus as a vegetable dish, are welcoming the cuisine of immigrant communities.

Owner Ji Choi estimates that 60 percent of her customers are regulars. It's a hidden gem for tourists seeking to avoid the barbecue and the out-of-towners.

"My restaurant is very small, compared to other big restaurants, but it's very fun," Choi said.

Crazy Noodle is located next to a convenience store and food market, owned by Choi's relatives. The market also makes food to order and also sells premade items including sandwiches and wraps. The restaurant has an open kitchen where patrons can watch dishes being prepared. The windowsills are decorated with miniature dolls and action figures, donated by regular customers in the roughly two years the restaurant has been open.

Choi and her small team of chefs turn out mouthwatering, and often spicy, dishes like Korean chicken soup, with a sweet-spicy broth and loads of chicken noodles, mushrooms and vegetables. Other brothy dishes include the mandou-gok — a soup with onions, carrots, eggs, seaweed flakes, mushrooms and tender, luscious dumplings instead of noodles — and yuk-gae-jang, featuring beef, turnip and mushrooms in a spicy beef broth.

The soups are great for people with colds. Or hangovers.

As its name suggests, the restaurants has several noodle dishes. Ja-Jang Noodle is a mix of chicken, potato, cabbage, onions, shrimp, zucchini and squid cooked in a black bean paste sauce. Choi says her most popular dish is called jap-chae noodle, which has clear sweet potato noodles, carrots, spinach, mushrooms and sesame oil with soy sauce.

"It's not really crazy spicy, it's common spicy," Choi said of the jap-chae noodle dish.

The hot soups and some noodle dishes are served in large colorful bowls. When the lid is lifted, steam and aromas of spices like Thai chili waft into the air, a kind of great-smelling instant facial.

Patrons can customize the spice level in all the dishes, from mild to face-melting. Many of the dishes are vegetarian or can be adjusted for vegetarians.

The restaurant is in Midtown, an eclectic neighborhood east of downtown. It has a mix of working-class homes, apartments and fancy mansions; its residents range from families to students to single professionals. In a three-block area, there's a Mexican restaurant, an Irish pub, a gastropub, a Cajun-Creole spot, an Indian eatery, a sub chain, a yogurt shop, a fancy Italian joint, a deli and a Bar Louie.

If Memphis has a hip neighborhood, Midtown is it.