He plays a bumbling dad on ABC's "Modern Family," but in Salt Lake City, Ty Burrell is trying out for a role as restaurateur. Burrell has just opened Beer Bar, a beer garden-like eatery that serves 150 beers paired up with an array of house-made bratwursts, local breads and Belgian fries. 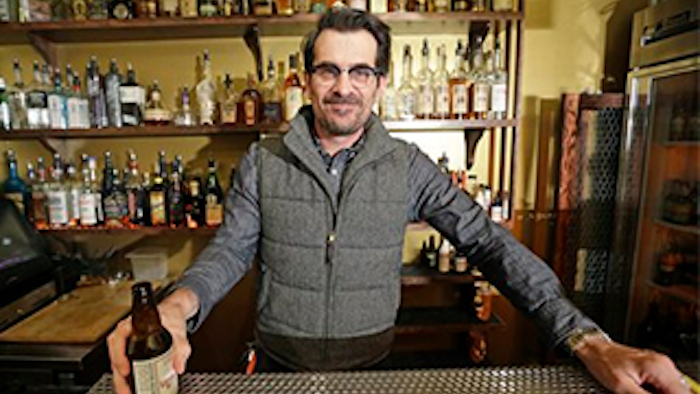 SALT LAKE CITY (AP) — He plays a bumbling dad on ABC's "Modern Family," but in Salt Lake City, Ty Burrell is trying out for a role as restaurateur.

Burrell has just opened Beer Bar, a beer garden-like eatery that serves 150 beers paired up with an array of house-made bratwursts, local breads and Belgian fries. The restaurant, which has high ceilings and long tables and benches to evoke that Bavarian beer hall feel, is next door to the cocktail bar Burrell co-owns with an equally simple name, Bar X.

"It's a super simple menu, which is what we wanted from the beginning," says Burrell, sporting a scruffy beard and glasses. "Basic, but well-made and local. Instead of putting the energy into a lot of elements, making sure you have fewer elements and you are taking the time to make them right."

For the menu, the Emmy-winning actor teamed up with Viet Pham, an up-and-coming Salt Lake City chef who was one of Food and Wine magazine's best new chefs in 2011. Burrell met Pham when he and his wife ate at Forage, Pham's Salt Lake City restaurant, and were blown away by Pham's cooking. It turned out that Pham was a fan of Bar X, and the seeds for the future partnership were planted.

Pham created what has become Beer Bar's signature dish: the Reuben brat. It's a sandwich stuffed with pastrami, bratwurst, Swiss cheese and pickled vegetables that Burrell says he's already eaten way too many of.

The bar and restaurant cement Burrell's roots in Salt Lake City, known less for attracting Hollywood types and more as host of the 2002 Winter Olympics and home to The Church of Jesus Christ of Latter-day Saints.

Though born and raised in Oregon, Burrell says he now feels very much like a "Salt Laker," having lived in the city since 2008. He and his wife, who was born and raised in Utah, live here part of the year with their two young daughters when Burrell is not in Los Angeles filming Modern Family or working on other projects.

"I loved it from the first time I got here," he said. "It's a very unassuming place, it's a very humble place."

Since Burrell moved here, his mother, brother and a few cousins also relocated to Utah. His brother, Duncan Burrell, is one of his business partners and part of a team that oversees the day-to-day operations of the new restaurant and Bar X, which are joined by a shared door between them.

Burrell said he often gets bemused looks from his Hollywood friends when they find out he owns a bar and beer garden in Utah — famous for its teetotaling culture and strict liquor laws.

"There's usually some sort of confusion about why I've opened a bar in Salt Lake," he said Burrell, laughing.