McDonald's famous spokesclown will take an active role on social media for the first time, using the hashtag #ronaldmcdonald. Ronald McDonald, known for his painted-on smile and baggy yellow jumper, will also get a new wardrobe, including cargo pants and a vest. 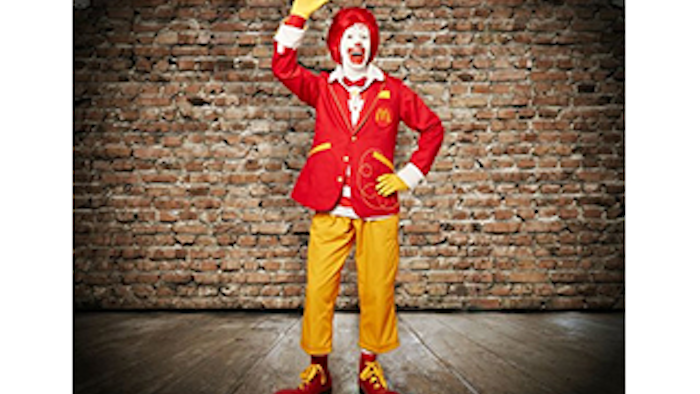 NEW YORK (AP) — Ronald McDonald has a new look, and he's ready for a selfie.

McDonald's said Wednesday its famous spokesclown will take an active role on social media for the first time, using the hashtag #ronaldmcdonald. The move marks a turnaround from recent years, when the red-haired mascot faded to the background as McDonald's came under criticism for using him to market to children.

But the world's biggest hamburger chain seems ready to give its clown a higher-profile role as it works to boost weak sales.

The company says Ronald McDonald won't have his own Twitter handle, but that it will post photos and videos of him on its existing social media accounts. The clown, known for his painted-on smile and baggy yellow jumper, will also appear in TV ads later this year wearing new clothes, including cargo pants and a vest. Other photos of him posted by McDonald's on Wednesday showed him wearing a red sports coat over the cropped pants.

"His iconic big red shoes will remain the same," McDonald's said in a statement.

"Selfies ... here I come! It's a big world and now, wherever I go and whatever I do ... I'm ready to show how fun can make great things happen," McDonald's quoted the fictional clown as saying.

Ronald's promotion comes as McDonald's looks to reset its business. The company, based in Oak Brook, Ill., is hoping to fix slowness and inaccuracies in orders and is emphasizing its most popular items in marketing, including the Big Mac and french fries.

Ronald McDonald, first played by longtime TV weatherman Willard Scott, made his debut in 1963 and has played a major role in making McDonald's the dominant player among kids in the fast-food industry. The company even named him its "chief happiness officer" in 2003.

A group called Corporate Accountability International in recent years has pressed McDonald's to retire the clown and stop marketing its food to children. McDonald's has defended its mascot as "a force of good." At its annual shareholder meeting last year, CEO Don Thompson noted the company hasn't been using the clown the way it used to, but stood by the mascot.

"Ronald is not a bad guy — he's about fun, he's a clown. So I'd ask all you to let your kids have fun too," Thompson said.

On Wednesday, the company said Ronald "represents the magic and happiness" of McDonald's.

After staying relatively quiet in recent years, the clown did make an appearance of sorts online recently after Taco Bell ran TV ads featuring real-life Ronald McDonalds professing their love for its breakfast. McDonald's subsequently tweeted a photo of the clown kneeling down to pet a Chihuahua. The image was a reference to Taco Bell's retired mascot and received around 3,000 retweets.

McDonald's said Franchise owners around the world will be able to use new designs incorporating the revamped Ronald over the next few years.