Jim Beam Bourbon on Wednesday achieved a bourbon-industry first by filling its 13-millionth barrel of bourbon since the repeal of Prohibition in 1933. The barrel was filled and sealed by Fred Noe, Jim Beam's great-grandson and seventh generation master distiller. 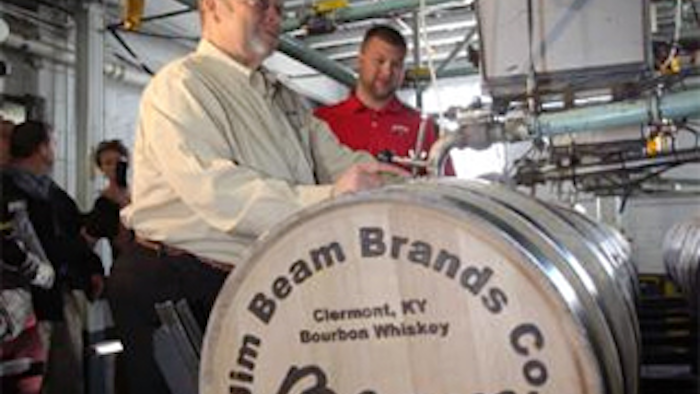 CLERMONT, Ky. (PRNewswire) — Jim Beam® Bourbon made history on Wednesday by achieving a bourbon-industry first by filling its 13 millionth barrel of bourbon since the repeal of Prohibition in 1933. The barrel was personally filled and sealed by Fred Noe, Jim Beam's great-grandson and seventh generation master distiller, at the company's flagship distillery in Clermont, Ky. Also on hand to celebrate the milestone was Freddie Noe, an eighth generation Beam who also works at the distillery.

"I guess, in this case, 13 is a lucky number," said Noe. "As a family, we're proud of this milestone. It speaks loudly and proudly to our longevity and history, and bolsters our position as the world's largest producer of bourbon. We've been making bourbon a long time and we've made a lot of it."

The historic milestone, achieved less than three years after the filling of the 12 millionth barrel, underscores bourbon's soaring popularity the world over. Domestic sales of bourbon have increased by 40 percent in the past five years and exports have topped the $1 billion mark.

Fueled by the company's commitment to innovation and pioneering the flavored whiskey category, Beam has continued to expand its operations in Kentucky to meet increased production demands while remaining true to the brand's heritage and authenticity.

"This recent success is a testament to the craft and heritage of 'America's Native Spirit,'" said Noe, who has been on hand for a number of barreling milestones in his 30 plus years at the Beam distillery. "Globally, bourbon is in huge demand, and we're producing it at a faster rate than ever before. We expect even less time to pass between now and the 14millionth barrel fill than the three short years it took us to hit 13 million after 12 million."
The 13millionth barrel will be aged inside the distillery's historic rackhouse D, a nine-story rackhouse re-built by Jim Beam and his son, T. Jeremiah, after Prohibition, right on the distillery grounds and open to Beam's bourbon fans who come to tour the Jim Beam American Stillhouse.

According to Noe, 13 million barrels of bourbon would:

Headquartered in Deerfield, Illinois, Beam is traded on the New York Stock Exchange under the ticker symbol BEAM and is included in the S&P 500 Index and the MSCI World Index. For more information on Beam, its brands, and its commitment to social responsibility, please visit www.beamglobal.com and www.drinksmart.com.