Overflowing rivers in Serbia and Bosnia are leaving tons of dead cows, pigs, sheep and chickens in their wake. Serbia's senior veterinarian says 140 tons of drowned animals have been destroyed so far, but more work lays ahead to clear areas so residents can return. 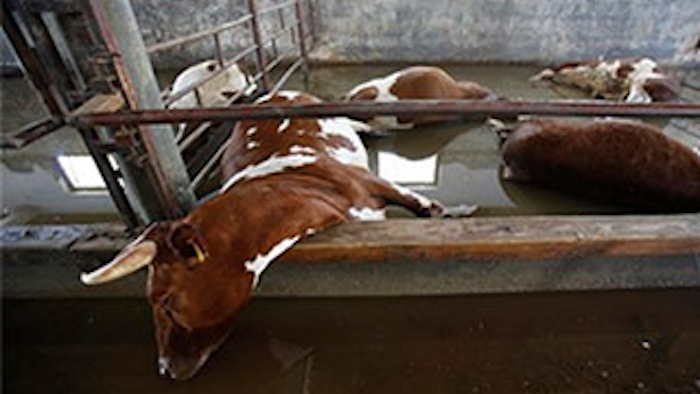 SAMAC, Bosnia-Herzegovina (AP) — A new calamity emerged Tuesday in the flood-hit Balkans as rescue workers battled overflowing rivers — and were confronted by wastelands of drowned livestock.

As the rainfall stopped and temperatures rose, the withdrawing floodwaters revealed a harrowing sight: thousands of dead cows, pigs, sheep, dogs and other animals left behind as their panicked owners fled.

"There are tons of dead animals that we must dispose of," Serbian Prime Minister Aleksandar Vucic told a government meeting.

The record flooding in Bosnia, Serbia and Croatia in the past week has forced half a million people from their homes and led to at least 44 deaths: 22 in Bosnia, 20 in Serbia and two in Croatia. Authorities said the death toll could rise.

Bosnia declared Tuesday a day of mourning while Serbia said it would hold three days of mourning starting Wednesday.

In the northern Bosnian town of Samac, troops used ropes to pull nearly 400 dead cows out of a barn and drove the carcasses away on trucks.

In Samac, like many Bosnian and Serbian towns, waters rose within hours, racing into yards and homes without warning. Farmers often had no time to free their livestock from barns or fenced fields, so that they could attempt to swim to safety.

Many dead animals were found slumped over the metal fences they had tried to jump over.

"Dead animals are a special problem and those have to be removed and destroyed properly," said Bosnia's chief epidemiologist, Dr. Zeljko Ler.

Serbia's senior veterinarian, Sanja Celbicanin, said 140 tons of drowned animals had been destroyed so far but much more work lay ahead. Some 1,900 sheep and lambs died in just one area of central Serbia and teams could work only in areas deemed safe by police, she said, urging residents not to touch any dead animals.

Residents in both countries were told not to return to their homes before teams disinfect the area and not to eat any food from flooded gardens, orchards or barns.

Ler warned that acute stomach ailments and other diseases, including hepatitis and typhoid, often spread after flooding.

"We are warning the population to drink only boiled or bottled water," he said. "There are still no mass infections, but for some diseases the incubation period is 14 to 21 days."

Water levels were still rising Tuesday in parts of northern Bosnia, particularly the town of Orasje, with flood levels exceeding one meter (yard).

Rescuers led some residents to safety and delivered aid to other residents who stayed in upper floors of their homes. The hospital in Orasje issued an appeal for staff and medicines.

The European Commission said nearly 400 relief workers have been deployed in Serbia and Bosnia.

The flooding was still threatening Serbia's biggest power plant in the town of Obrenovac on the River Sava, a tributary to Europe's second-biggest river, the Danube. Serbian authorities responding to rising Danube water levels ordered the evacuation of two more villages Tuesday.

In Bosnia, army helicopters dropped iron bars onto collapsed river barriers for a second day and planned later to drop sandbags on top of them in hopes of patching the flood defenses.

Bosnia's presidency said it will organize an international fund-raising conference and asked banks to renegotiate the mortgages of homes destroyed in the flooding.