Rudy Kurniawan, whose family became wealthy operating a beer distributorship in Indonesia, said his own obsession with fine wines led him to actions that were wrong, both morally and socially, and he will return to Indonesia after he serves his sentence. 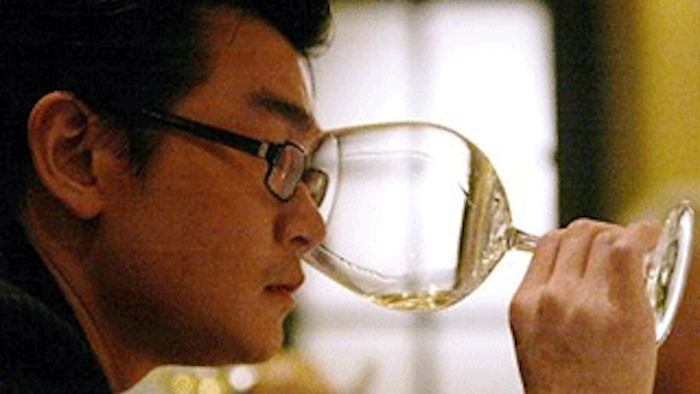 NEW YORK (AP) — A wine collector convicted of fraud for manufacturing fake vintage wine in his California kitchen has asked a judge for leniency Thursday, saying his actions were foolish.

Rudy Kurniawan told the judge in a letter that he "never meant to hurt or embarrass anyone" and asked that he be allowed to return to his ailing 67-year-old mother.

Kurniawan's letter to U.S. District Judge Richard M. Berman was filed the same day his sentencing was postponed to July 17.

A jury convicted Kurniawan in December of mail and wire fraud charges that could bring up to 40 years in prison. Prosecutors say federal sentencing guidelines call for him to serve at least 11 years in prison while defense lawyers say the two years he has spent in prison already is sufficient punishment.

Prosecutors say Kurniawan, 37, made between $8 million and $20 million from 2004 to 2012 by selling bogus bottles of wine he manufactured in his Arcadia, California kitchen. The government said the profits enabled him to live affluently in suburban Los Angeles, mingling with wealthy and influential people interested in vintage wine as he bought luxury cars, designer clothing and dined at the best restaurants.

The trial featured testimony from billionaire yachtsman, entrepreneur and wine investor William Koch, who said Kurniawan conned him into paying $2.1 million for 219 fake bottles of wine.

Kurniawan, whose family became wealthy operating a beer distributorship in Indonesia, said his own obsession with fine wines led him to actions that were wrong, both morally and socially, and he will return to Indonesia after he serves his sentence.

"Wine became my life and I lost myself in it," he wrote. "What originally started out as buying a few bottles of wine at a local store over the course of years turned into buying millions of dollars worth of wine."

He said his obsession attracted attention from successful and intelligent people whose acceptance he craved.

"I now realize that all this was false and pretentious and that my priorities were completely out of order. The things I did to maintain this illusion were so foolish. The end was inevitable," he added.