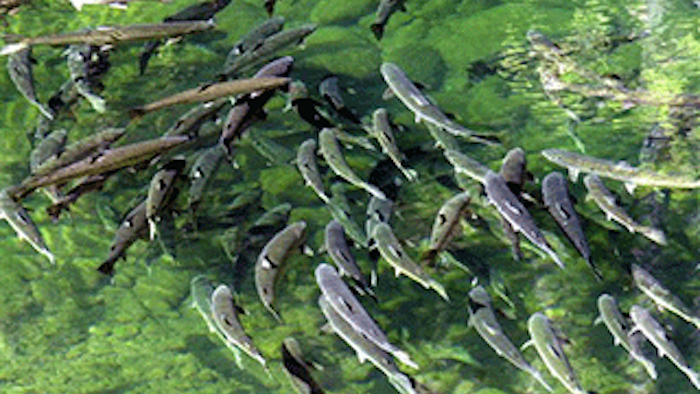 GRANTS PASS, Ore. (AP) — A new study suggests that steelhead trout can have trouble using the Earth's magnetic field to navigate if they were raised in a hatchery, where the field can be distorted by iron pipes.

Scientists at the Oregon Hatchery Research Center in Alsea raised two sets of fish: one outside the hatchery with a natural magnetic field, and one inside the hatchery, where instruments showed the field was distorted.

The scientists found that when a field was created simulating the intensity and inclination of a spot in the ocean off California in the southern part of the steelhead's range, most of the fish from the first group pointed northwest and out to sea. When the field was changed to simulate a location off Alaska, the northern part of their ocean range, most of the fish turned to point southeast, toward home. Fish raised in the distorted magnetic field did not orient themselves in any particular direction.

"I would not go out and tell hatchery managers to pull out all the iron pipes and replace them with PVC or aluminum," said lead author Nathan Putman, a researcher at Oregon State University at the time of the study who is now at NOAA Fisheries Service in Miami working on fish migration questions. "We know it has an effect. What is not clear is whether the fish can recalibrate their magnetic sense after leaving the hatchery, or whether they are confused for the rest of their lives."

The study was published in Wednesday's edition of the Royal Society journal Biology Letters.

Peter B. Moyle, a professor of fish biology at the University of California at Davis, said in an email that the study was "a good demonstration of how fine-turned steelhead and salmon are to their environment.

"The magnetic sense of fish is a relatively new discovery, especially in relation to its importance for navigation," he added. "This study nicely shows one more reason why we need to keep maintaining wild populations of salmon and steelhead and not just rely on hatcheries."

Steelhead are rainbow trout born in Western rivers that migrate to the ocean, where they feed and grow to adulthood, then return to their native rivers to spawn. Due to more than a century of overfishing and habitat loss, the great bulk of steelhead and salmon are raised in hatcheries, and many surviving wild populations are protected by the Endangered Species Act.

Research in recent years indicates that salmon and steelhead navigate relying on their perceptions of the Earth's magnetic field, until they get close enough to their native rivers for their sense of smell to take over. Scientists think the magnetic receptors are inside the nasal area of steelhead.

As many as 60 percent of the fish raised in some hatcheries fail to return to their native streams, swimming up other rivers, Putman said. Rates vary year to year, and by hatchery. Hatchery fish also have a lower rate of ocean survival than wild fish, particularly in years when food is not abundant. That may be because they have lost the ability to find feeding grounds that have sustained the species for thousands of years.

The scientists wrote that a likely explanation is that as the fish grow up in a certain place, they calibrate an inherent magnetic map they later use to swim down a river to the ocean, then turn north to feeding grounds in the Pacific. If the magnetic field is distorted during this calibration, the fish are confused.

Co-author David Noakes, a senior scientist at the hatchery research center, said more experiments are needed to determine if the magnetic confusion is temporary or long-lasting, which would be important to fish survival. Discussions are underway to do an experiment breeding two groups of fish, one in a natural magnetic field, and one in a distorted field, releasing them, and seeing which group has more fish return to spawn.