NH Frozen Pizza Facility Comes Back From the Ashes

Rustic Crust, a manufacturer of organic and all-natural pizza crust and sauce, is soon to break ground with a new frozen pizza facility on the site of its former factory in Pittsfield, N.H., which burned to the ground earlier this year. 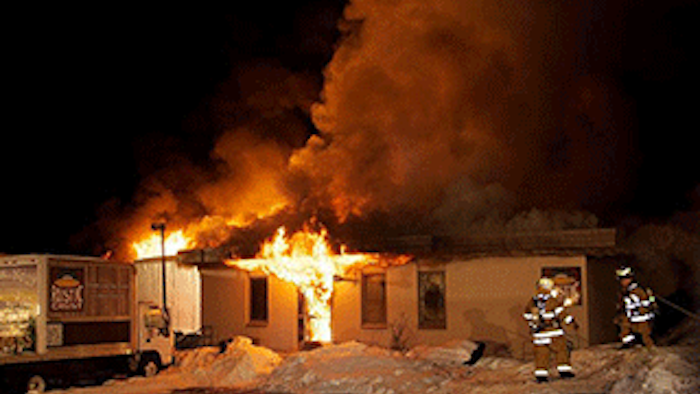 PITTSFIELD, N.H. (PRNewswire) — Rustic Crust, leading manufacturer of organic and all-natural pizza crust and sauce, today honored the New Hampshire Police, Fire & EMS Foundation, a non-profit organization committed to supporting firefighters, police officers and emergency medical service personnel, for its statewide contributions. The event coincided with the ground-breaking of a new Rustic Crust and American Flatbread frozen pizza facility soon to be erected on the site of its former factory in Pittsfield, NH, which burned to the ground earlier this year. The new two-story 27,000 square-foot facility, 30 percent larger than the original structure, will be in operation this fall.  After the fire, Rustic Crust's President & CEO Brad Sterl kept more than 100 workers on payroll while he began to rebuild the company.

Sterl and Governor Maggie Hassan recognized first responders as unsung heroes who risk their lives daily to protect the communities they serve, just as they did during the company's devastating fire. The event marks the start of a national campaign, The Rustic Crust First Responders Recognition program, to support and acknowledge these service workers across the nation. In New Hampshire and in states across the U.S., Rustic Crust and American Flatbread frozen pizzas will donate product to state first responder organizations assisting with fundraisers and other events. The company will also continue to send its mobile pizza truck to natural disaster sites to feed fatigued workers.

"As a result of the fire at our production facility, we know firsthand the courage and sacrifice displayed by first responders," said Brad Sterl, CEO of Rustic Crust. "We are launching this national program to honor the extraordinary work of these brave men and women - fire, police, and emergency rescue people – in their times of need."

Rustic Crust was founded in 1996 and is the number one U.S. national brand of natural prepared, ready-made pizza crusts. American Flatbread is a market leader in natural frozen flatbread pizzas which are available in supermarkets, health and gourmet stores nationwide. The company is Pittsfield, New Hampshire's second largest employer.