Ellen Merkel says she gets "a little teary-eyed" when she thinks about the Vermont Yankee nuclear plant sending its last electrons to the regional power grid. She knows it will likely mean moving from her nice neighborhood in Vernon, where her husband works at the plant, to the South for a new job. 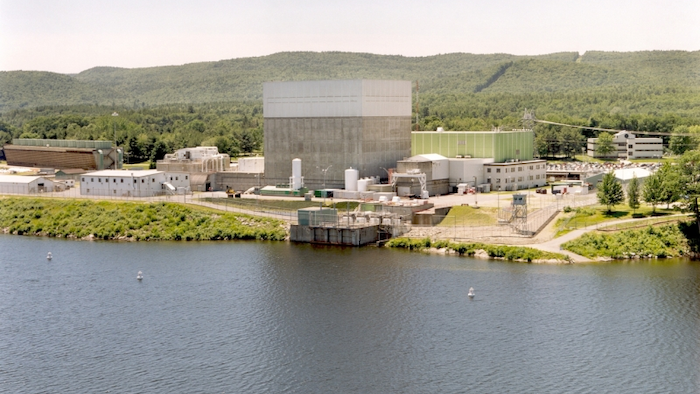 VERNON, Vt. — Ellen Merkel says she gets "a little teary-eyed" when she thinks about the Vermont Yankee nuclear plant sending its last electrons to the regional power grid. She knows it will likely mean moving from her nice neighborhood in Vernon, where her husband works at the plant, to the South for a new job.

Frances Crowe, of Northampton, Massachusetts, says she'll take some satisfaction that her anti-nuclear activism, which began before Vermont Yankee was built in the late 1960s, has had an impact. But she promised to continue to push for the highly radioactive spent fuel from the plant to be moved as soon as possible.

Those were among the reactions in the three-state region of Vermont, New Hampshire and Massachusetts as the plant finishes powering down and prepares to disconnect from the grid, most likely Monday.

"Economically it's going to really hurt," said Bob O'Donnell, co-owner of Trend Business Solutions, a small Vernon business that sells clothing and other items adorned with business logos, including that of Vermont Yankee. "It's going to kill the tax base."

Vermont Yankee, the state's only nuclear reactor, employed more than 600 people when it announced it would close. The workforce will be cut in half after a round of layoffs and retirements Jan. 19. In 2016, the plant will see another big reduction as it prepares for a 30-year period during which time its radiation will cool. The plant likely won't be dismantled until the 2040s or later.

New Orleans-based Entergy Corp. bought Vermont Yankee in 2002 from a group of New England utilities that had owned the plant since it opened in 1972. In August 2013, Entergy announced it would close the plant because it was no longer economical to operate.

"This has been a bad investment for us," said Barrett Green, an Entergy finance executive who recommended both that Entergy buy the plant and later that it be closed.

The company was betting on a carbon tax, or some other hit on fossil-fuel-fired power plants, that would make nuclear power a clear winner. Instead, Green said, nuclear plants have been hit with increasing "regulatory costs" like beefed-up security post-9/11 and new safeguards against extreme events like the earthquake and tsunami that struck a nuclear station in Japan in 2011.

A boom in construction of natural-gas-fired power plants around New England has helped make Vermont Yankee less competitive, but the Nuclear Energy Institute, an industry group, said the real problem is a regulatory system not working to keep nuclear plants open.

"Other nuclear energy facilities — producing affordable electricity safely and reliably — are at risk of premature closure due to competitive electricity markets that are not working for the benefit of consumers or the long-term reliability of the electric grid," said Marv Fertel, NEI president and CEO. "It is simply unsustainable and shortsighted to continue to shut down perfectly good energy facilities and put at risk the fundamental values of our electricity system."

At ISO New England, the regional power dispatch agency, spokeswoman Marcia Blomberg said, "We determined a couple of years ago that the power grid could be operated reliably without Vermont Yankee."

The announcement that the plant was closing came weeks after it won a round in a legal battle to keep it open. A U.S. appeals court upheld a ruling overturning state laws that appeared aimed at closing the plant. One required a vote of support from both legislative chambers before the state Public Service Board permitted the plant to operate 20 years beyond its initial 40-year license.

The state Senate defeated the measure in 2010 and the House never acted, prompting Entergy to sue. The legislative action came amid political turmoil for the plant: Officials there were caught making false statements to lawmakers and regulators that the plant did not have the sort of underground piping that carried radioactive substances. There was also widespread suspicion among lawmakers about an Entergy plan to sell off Vermont Yankee and other northern reactors to a new, heavily leveraged spinoff company.

On top of that, a vocal cadre of well-organized and well-funded anti-nuclear activists in southeastern Vermont and neighboring Massachusetts took to the streets and to regulators' hearing rooms in a bid to shut the plant down. They also had the ear of Gov. Peter Shumlin, who had orchestrated the vote in the Senate against the plant's continued operation.

Entergy officials have said the shutdown decision was purely a matter of economics. For its part, the New England Coalition, perhaps the most vocal and litigious of the anti-nuclear groups, vowed to stay on the plant's case as it prepares to move highly radioactive spent fuel to concrete and steel casks for its cooling-off period.

"If our mission was to eliminate the threat of nuclear pollution and environmental damage from Vermont Yankee, then contrary to wishful and popular perceptions, advocacy operations are far from over," the group said on its website.

Now the plant moves toward decades of mothballing while its radioactive components cool and its decommissioning fund grows. It's expected to cost nearly $1.25 billion to dismantle the plant. The fund now has about half that.