The developer of the Keystone XL pipeline remains committed to completing the final leg of the project even though President Barack Obama denied the Canadian company's request for a federal permit. 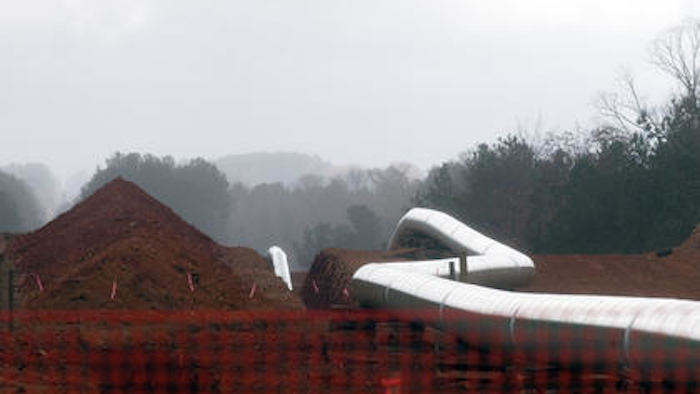 The developer of the Keystone XL pipeline remains committed to completing the final leg of the project even though President Barack Obama denied the Canadian company's request for a federal permit, a spokesman said Wednesday.

TransCanada's announcement came as the company withdrew its application for route approval through Nebraska. Even before Obama rejected the permit Nov. 6, Nebraska had been a major roadblock because of lawsuits filed by landowners and environmental groups.

Company officials were scheduled to meet with the Nebraska Public Service Commission on Thursday to discuss the application process.

"Although we are withdrawing the application at this time, we are reserving the right to reapply to the (Nebraska Public Service Commission) at a later date and remain committed to completing the final leg of the Keystone Pipeline system," TransCanada spokesman Mark Cooper said in a statement, noting that the company was still considering what to do next.

The pipeline is likely to factor into the 2016 presidential election, because all of the leading Republican candidates who support the project as a job creator and Democratic hopefuls oppose it because of environmental concerns. The pipeline was projected to carry 800,000 barrels a day of crude from Canada and North Dakota to Nebraska, where existing pipelines would bring the oil to Gulf Coast refineries.

TransCanada's latest move is unlikely to halt the debate in Nebraska anytime soon. Landowners who oppose the project have said they are worried the company still has legal rights to large stretches of land along the pipeline's proposed route and could sell those easements to another pipeline company.

"Let's close this chapter in our state once and for all," said Jane Kleeb, director of the anti-pipeline group Bold Nebraska.

Opponents also plan to continue with lawsuits challenging the state law which allowed former Gov. Dave Heineman to approve the route through Nebraska in 2013.

In January, the Nebraska Supreme Court allowed the 2012 pipeline-siting law to stand by default, as the court fell short of a supermajority vote in favor of the opponents. Three judges refused to rule on the law, arguing that they couldn't because the plaintiffs didn't have legal standing. Opponents responded by filing a nearly identical lawsuit involving landowners who were directly affected.

TransCanada announced in October that it would seek approval again through the Public Service Commission, an elected five-member group that regulates the state's pipelines, taxis and other "common carriers" used for transportation.

Chris Peterson, a spokesman for the industry group Nebraska Jobs and Energy Independence, said the Keystone XL remains important to the nation's energy and economic security.